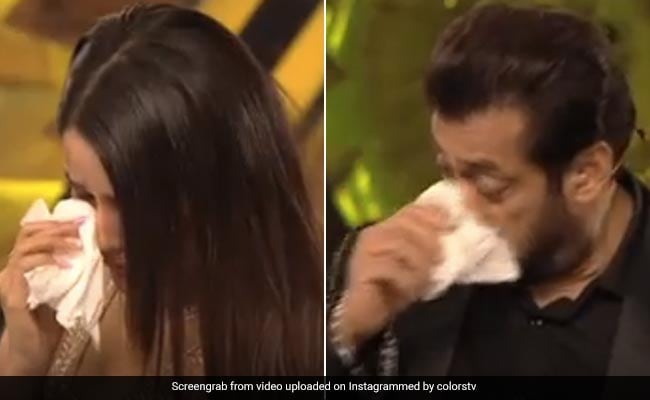 Bigg Boss 15’s grand finale is currently taking place and many celebrities have come on the show to perform and cheer for their favourite contestant. Shehnaaz Gill, who was a part of Bigg Boss 13, also came on the show to perform and gives a tribute to the late Sidharth Shukla. Sidharth was the winner of Bigg Boss 13. After the tribute, Shehnaaz Gill and Salman Khan meet and seeing each other, the two got emotional. The last time Shehnaaz was on the show was with Sidharth Shukla. The official handle of ColorsTV shared a promo of the show and captioned it as “Bigg Boss ke manch par aayi Shehnaaz Gill, poorani yaadon ko taaza karke ho gaye saare emotional.”

In the promo, Salman Khan is seen welcoming Shehnaaz Gill on the stage to loud applause. As Shehnaaz reaches Salman, she is seen getting a emotional. “Aapko dekh kar emotional ho gayi (I got emotional seeing you),” she says to Salman. Hearing this, Salman Khan gave a hug to Shehnaaz Gill to console her and after that, they got teary-eyed.

Sidharth Shukla died on September 2, 2021. Shehnaaz Gill and Sidharth Shukla met on the sets of Bigg Boss 13 and became good friends. After Sidharth’s death, Shehnaaz has remained low-key and is often seen spending time with the late actor’s family.

Shehnaaz Gill’s performance in Bigg Boss 15’s grand finale will be aired in today’s episode and the show will air from 8 pm onwards on Colors TV.