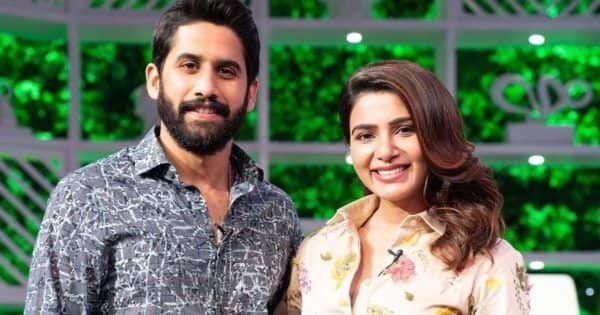 Samantha Ruth Prabhu and Naga Chaitanya, the most loved couple in the Telugu film industry, had shocked their fans when they decided to separate ways. The announcement on social media in October last year led to much curiosity in public and media circles. So far, both of them have not divulged the reasons for their split. Not even, Chaitanya’s father Nagarjuna who is proud the way his son handled the tough situation in his life with grace. While both Samantha and Chay have gotten themselves busy with their upcoming projects, Samantha revisited movies with her estranged husband as she hopped on the viral ‘That’s Not My Name’ trend. Also Read – Trending South News Today: Thalapathy Vijay’s Beast announcement, Jacqueline Fernandez replaced by Sonal Chauhan in Nagarjuna’s The Ghost and more

As per the trend, the participants list down the names they are usually or often identified with, while playing the 2009 song by the Ting Tings in the background. Samantha used some clippings from her best movies and added the names of her characters she played in those films. Interestingly, Samantha named three characters from the movies which Chaitanya was a part of. Also Read – Trending South News Today: Chiranjeevi, Mahesh Babu, SS Rajamouli mourn Lata Mangeshkar’s loss; Naga Chaitanya opens up on Laal Singh Chaddha and more

Samantha started off with her character of Jessie from Ye Maaya Chesave, followed by Bindu from Naan Ee, Sravani from Majili, Madhuravani from Mahanati, Raji from The Family Man 2, Baby from Oh! Baby, Ramalakshmi from Rangasthala, Tara from Mersal, Mithra from Theri and Vaembu from Super Deluxe. She ended the video with a glimpse from her first item song Oo Antava from Allu Arjun‘s Pushpa, which has become a rage on social media platforms. Also Read – Trending Entertainment News Today: Shah Rukh Khan recites dua at Lata Mangeshkar’s funeral; Ranbir Kapoor-Alia Bhatt to get married in April 2022 and more

In fact, last month, when Naga Chaitanya was asked with whom he shares the best onscreen chemistry and pat came the name, Samantha Ruth Prabhu. He was also asked about a film that should be remade in Hindi and he said Majili where they both featured in.

On the work front, while Naga Chaitanya’s last movie Love Story directed by Sekhar Kammula, did well at the box-office, Samantha’s item number in Allu Arjun-starrer Pushpa has become a national sensation. Both of them, separately, have several movie projects lined up in the days ahead.