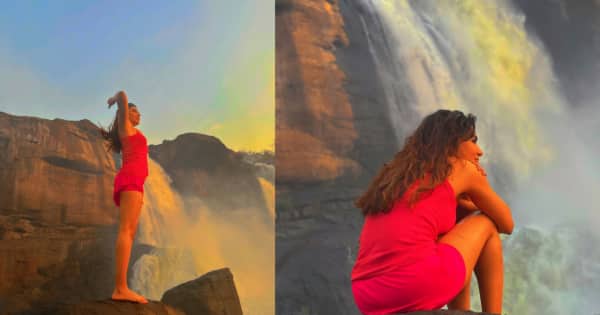 Samantha Ruth Prabhu has been on a journey of self-discovery. She has been visiting spiritual places and trying to heal herself after separation from actor-husband Naga Chaitanya. Be it making the Chaar Dham yatra or visiting temples, Samantha has been exploring her spiritual side lately. And the actress recently Samantha Ruth Prabhu shared pictures and videos from her visit to the Athirappilly Falls. And boy oh, boy, it’s such a serene sight. Samantha also shared a heartfelt message on ‘Life’ in the caption. Also Read – Trending South News Today: Samantha Ruth Prabhu dances to Vijay’s Arabic Kuthu; Bheemla Nayak digital rights sold for whopping price and more

Samantha is seen in a pink tank top and shorts. She is seen chilling and enjoying the weather and the calming view. She captioned the post saying, “Life. You enjoy it or endure it as it comes and goes, as it ebbs and flows. In her Instagram stories, Samantha is seen flaunting her toned body. She also shared a video of herself meditating alongside the Athirappilly Falls. The view is so breathtaking that you’d want to be there right now. Check out Samantha’s post here: Also Read – When Baahubali actress Anushka Shetty exposed the casting couch in Telugu film industry; said, ‘I admit that it exists, but…’

Talking about the meditation video. The Shaakuntalam actress shared a quote from Sadhguru while sharing the video. It read, “Meditation is a means to realize the beauty of your existence.” And now, check out the serene and breathtaking view of Samantha Ruth Prabhu meditating in front of the Athirappilly Falls here: Also Read – Samantha Ruth Prabhu keeps herself entertained by dancing on Thalapathy Vijay’s Halamithi Habibo ahead of a late night flight – watch

Meanwhile, Samantha Ruth Prabhu is awaiting the release of her first look from the mytho-epic love story, Shaakuntalam. The first look will be unveiled on 21st February 2022 at 9:30 AM. The Gunasekhar directed film also stars Dev Mohan in the lead. Samantha is also basking in the success of the hit song, Oo Antava from Pushpa. Reportedly, the actress charged about Rs 5 crore for the song. On the other hand, Samantha has a Hollywood project in her kitty, called Arrangements of Love in which she plays a bisexual detective in the film.