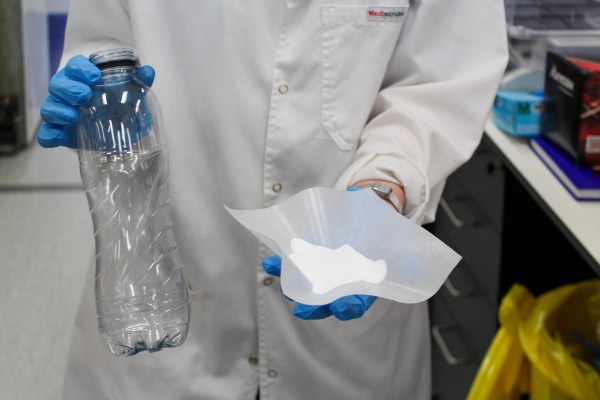 Global plastic use is expected to double by 2040, with most plastic sent to landfills and only 13 percent recycled. According to CIEL (Center for International Environmental Law), plastic production and incineration could produce 2.8 gigatons of carbon dioxide every year by 2050.

To help end the global plastic pollution, Australian enviro-tech startup Samsara Eco has developed an enzyme-based technology, which breaks down plastics (polymers) into their molecular building blocks (monomers) that can be used to recreate brand new plastic again (and again) or can be upcycled to more valuable commodities, founder and CEO of Samsara Eco Paul Riley told TechCrunch.

Reiley said Samsara’s technology ensures that plastics no longer need to be made from fossil fuels or plants (both have a significant environmental impact) and won’t end up in landfills or our oceans.

“The motivation behind this work comes from our concerns about the environment, especially relating to carbon emissions and plastic waste, combined with our love of enzyme engineering – being able to apply its skills to solve a global problem, change the system, and create a truly circular economy,” Riley said in an interview.

Today, Samsara has raised $6 million to build its first recycling plant later this year, with its full-scale production starting in 2023.

“The process will save an estimated 3 tonnes of carbon emissions for every tonne of plastic recycled by the process,” Riley said.

There are other companies across the globe using enzymes to break down plastic, but Samsara claims it uses a different process and enzymes. According to Riley, the startup can deliver the full depolymerization of plastic in an hour, while most other enzymatic processes take more than 12 hours, Riley explained.

“The current approach to recycling is simply inefficient and ill-equipped to handle the plastic pollution crisis we are faced with today,” Riley said in a statement. “Samsara is that solution. Instead of mining for fossil fuels to create new plastics or relying on current recycling methods which result in only nine percent being actually recycled, we can take plastic that already exists and infinitely recycle it.”

Unlike other alternate recycling solutions, Samsara’s process is performed at room temperature and is truly carbon neutral, operating it in a sustainable way, Riley said in the company’s statement.

Riley said Samsara is looking to raise another fundraising, aiming approximately $50 million later this year from Australian and international investors for its first commercial-scale production to recycle 20,000 tonnes of waste per annum.

It has partnered with Woolworths Group which has committed to turning the first 5,000 tonnes of recycled Samsara plastic into packaging for its own branded goods, aiming to be in stock by the end of this year. In addition, It also had a partnership with Tennis Australia to recycle 5,000 plastic bottles from the Australian Open.

The startup, launched in 2021, has a team of 13, primarily scientists and engineers, and researchers from the Australian National University in Canberra.

“Our long-term vision is to extend our technology capabilities to infinitely recycle other oil-derived plastic products like clothes made from polyester and nylon, so we never use fossil fuels to create new plastic again,” Riley said.