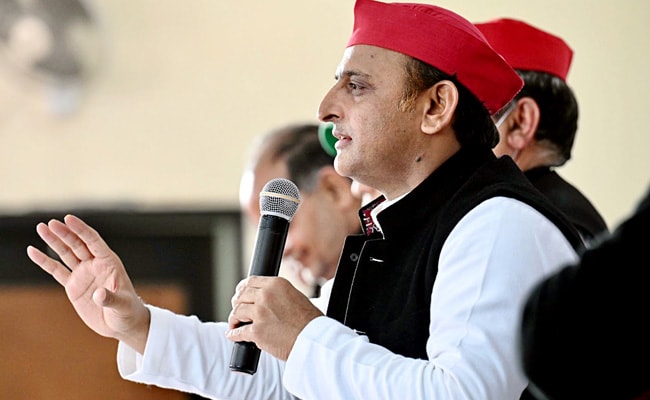 Campaigning for the Uttar Pradesh assembly elections, Samajwadi Party chief Akhilesh Yadav on Saturday asked people to “send us to Delhi” to have all their problems solved by resorting to caste census.

Electioneering in Aligarh, which goes to the polls on February 10 in the first phase of the seven-phase assembly election, Mr Yadav made the remark in answer to a query on the issue of reservation.

“Send us to Delhi, we will solve all the problems. We are talking about caste census,” said Mr Yadav.

On the BJP’s fate in the elections, Mr Yadav said the people in Aligarh have closed their doors on the BJP and sealed its fate with locks, a product the district is known for.

“In my first meeting in Mau, I had promised that the doors of the BJP (headquarters in Lucknow and other offices) will be closed and a latch will be put on it. The people of Aligarh will put a lock on it,” he claimed.

He said the people of Aligarh have decided to seal the BJP fate in the western UP after the Samajwadi Party forged its electoral alliance with the Rashtriya Lok Dal (RLD), he claimed.

The atmosphere in western UP indicates that the people have made up their minds to uproot the BJP and install the government of the Samajwadi Party and its allies, he reiterated. This is because this election is for saving the Constitution and the future of UP, he said.

Mr Yadav also attacked the Centre on the issue of the now-scrapped three farm laws which he alleged were withdrawn in the face of the assembly elections in five states, including UP and Punjab.

“The government had been praising the three farm laws. But as the elections of Punjab and UP approached, the three black laws were withdrawn. People want to know and the BJP must tell it how the three repealed laws were good for farmers as they claimed them to be so while enacting and implementing them,” he said.

The SP chief also claimed that the “double engine” BJP governments in the state and the Centre have disappointed farmers.

Accusing the government of doing little for people during the Covid pandemic, Mr Yadav said, “At the time of COVID-19, the farmers and labourers felt the need of the government the most but they were left to themselves.”

“The farmers and labourers will never forget this,” Mr Yadav said and added that the government was unable to provide hospital beds, medicines and oxygen.

“There is no count of how many lives were lost to corona. This double engine government has cheated the people,” he said.