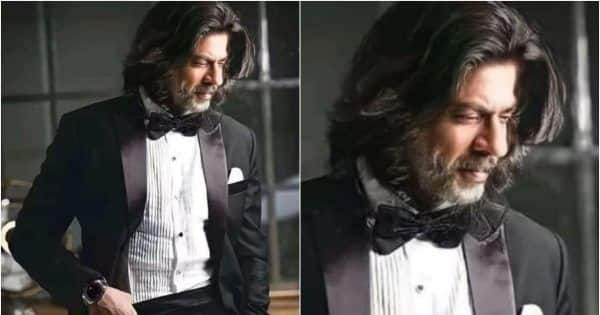 Shah Rukh Khan undoubtedly has a huge fan following and the actor’s fans are eagerly waiting to watch him on the big screen. While SRK has been busy with the shooting of Siddharth Anand’s Pathan, a picture of the actor has gone viral today on social media. In the picture, the superstar is seen in long hair and a salt-pepper beard, and he is looking dapper in it. The actor’s fans have gone berserk and they are wondering whether the picture is from a photoshoot for a brand or a movie. Also Read – Gehraiyaan star Siddhant Chaturvedi REVEALS how he landed into a FAKE audition of the sequel of Shah Rukh Khan’s film Josh

Well, SRK is surely looking hot in the picture, but the truth is that it’s an edited image. In the original image, the Pathan actor didn’t have such long hair and he had a clean-shaven look. It looks like the picture is from a brand photoshoot that was done by SRK earlier. Check out both the images below… Also Read – Filmy Friday: When Aishwarya Rai Bachchan made her breakup with Salman Khan official and it had something to do with Rani Mukerji

This one again proves the stardom of Shah Rukh Khan that even an edited image of the actor can go viral and take social media by storm. The edited picture also proves that SRK will look hot with long hair and a salt-pepper beard. So, maybe he should try this look in one of his upcoming movies.

On the work front, SRK is busy with Pathan which also stars Deepika Padukone and John Abraham. According to a report in Mid-day, the team will be flying to Spain in March this year to shoot for the movie.

Apart from Pathan, SRK will be seen in Rajkumar Hirani’s next and Atlee’s next. The movie, which is being directed by Atlee, went on the floors last year, and it also stars Nayanthara, Priyamani, and Sanya Malhotra. The film will mark Nayanthara’s Bollywood debut. Meanwhile, there have been reports of Taapsee Pannu starring opposite Shah Rukh Khan in Hirani’s film. However, there’s no official announcement about it.