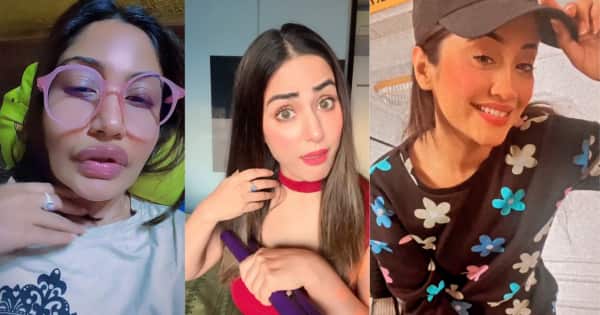 We are in the second week of 2022 already. It’s the second Sunday of January 2022 and the TV celebs are entertaining their fans with some amazing posts every day. In our weekly roundup of TV Instagrammers, we have some amazing celebs. Hina Khan, Nia Sharma, Nakuul Mehta, Shivangi Joshi, Arjun Bijlani and more have made it to our list of TV Instagrammers of the week. So without further ado, let’s get to see who rocked their social media with what posts online. Also Read – COVID attack: Ghum Hai Kisikey Pyaar Meiin’s Ayesha Singh, Pandya Store’s Alice Kaushik, Simran Budharup and more – Latest list of TV celebs who contracted the virus [PICS]

Shraddha Arya has been honeymooning in Maldives with her Navy Commander beau Rahul Nagal before New Year’s Eve. The Kundali Bhagya actress rarely shared pictures with Rahul on the gram. However, she did give a treat to her fans by sharing a video of her and Rahul’s honeymoon. It’s a collage of what they did in Goa in a reel format. “Can we flip back to the good times?! #Us #SkipToTheGoodPart #SAN @hideawaybeachmaldives,” she captioned the post. Also Read – TV News Weekly Rewind: Aamir Ali-Sanjeeda Shaikh get divorced, Nakuul Mehta’s son Sufi’s fight with COVID-19 and more

Naagin 5’s Surbhi Chandna shared a hilarious reel to entertain her fans. Surbhi is ace at being goofy. She shared a reel with a botox filter while mocking botox. A lot of her fans were surprised to see Surbhi in botox and wondered whether she had really done the lip fillers. Surbhi Chandna is the queen of entertaining reels. Also Read – Trending TV News Today: Sudhanshu Pandey on insecurity on Anupamaa sets, Shikha Singh’s COVID-19 ordeal, Gashmeer Mahajani quits Imlie and more

Former Yeh Rishta Kya Kehlata Hai actress, Hina Khan, is the DIVA. She is also an ace at making reels. The actress shared a reel video on ‘Am I the Drama?’. Hina’s expressions were on point. She was seen straightening her hair while doing so. She looked absolutely gorgeous.

Balika Vadhu 2 actress Shivangi Joshi was seen grooving to the trending ‘Kiss my a** goodbye’ reel. The actress was seen in a floral co-ord set and looked absolutely adorable in it.

Mohsin Khan wanted to attempt the Mann Bhareya reel with Heli Daruwala. However, the two majorly goofed up. Mohsin Khan looks as handsome as ever while Helo Daruwala looks oh-so-pretty, like always. The two also had adorable banter in the comments. Talking about the video, Mohsin said, “Yaar humse woh serious wala version naa ban ra tha… this is apna filmy take on the song.”

Divyanka Tripathi Dahiya attempted a fun reel wherein she tried posing as though a part of some iconic paintings and the results are beyond hilarious. Divyanka is a natural performer but when it comes to entertaining on Instagram, she loves to switch on her goofy charm. And we absolutely love it.

Ram Kapoor aka Nakuul Mehta is back on the sets of Bade Achhe Lagte Hain 2. The actor recently shared a reel depicting his happiness on being “Back in RK’s very sanitised shoes”. Nakuul Mehta had contracted COVID-19 a couple of days ago. He now has fully recovered from the same.

Devoleena Bhattacharjee is currently locked inside the house of Bigg Boss 15. She recently had to perform a torture task in which she was made to stand on a pole for long hours. Devoleena won a lot of accolades for her strength and dedication.

Rashami Desai was competing against Devoleena in the torture task. The actress fought strongly against her competitor and emerged as the winner. She was also labelled as the Task Queen thereafter.

Naagin actress Mouni Roy dropped a couple of gorgeous photoshoots on her gram. The actress is seen wearing a black bodycon outfit from Tutus Kurniati. The actress looked dropped-dead gorgeous in them. Check out the pictures here:

Arjun Bijlani who recently recovered from COVID has been back on sharing some goofy and naughty reels on Instagram. He has a naughty personality. The Naagin actor created a goofy reel on Mirchi (Chillies) and it’s funny AF.

Ishq Mein Marjawa, Jamai 2.0 actress Nia Sharma shared a stunning reel in which she turned Juliet and in a gorgeous lehenga choli. It was a BTS from some shoot it seems. She had her furry friends by her side. Nia was running around making her buddies chase her. She also flaunted her gorgeous outfit.

Comedian and actor Kapil Sharma took to his social media handle and shared a goofy video of his Netflix show. The actor revealed his drunk tweet to PM Narendra Modi due to which he had to rush off to Maldives. It cost him around Rs 9 lakhs. Kapil joked on himself and entertained everyone with the teaser of Kapil Sharma: I Am Not Done Yet.

Ghum Hai Kisikey Pyaar Meiin’s Aishwarya Sharma posted a thankful video on her gram as she recently completed 1 million followers on Instagram. The actress thanked her fans in the Shinchan style.

Sai aka Ayesha Singh of Ghum Hai Kisikey Pyaar Meiin fame shared a funny reel video on her gram. It talked about her ‘buddhi’ going on a walk and never coming back. The actress has contracted COVID. However, she is in quarantine and is recovering well.

With that, it’s a wrap on the TV Instagrammers of the week.