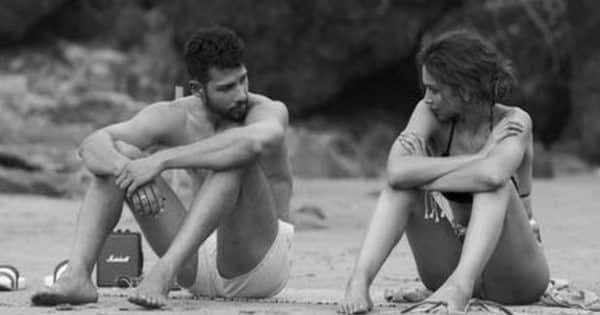 Gehraiyaan starring Deepika Padukone and Siddhant Chaturvedi is in the news. Their kissing and intimate scenes have raised many eyebrows. Now, in an interview to ETimes, Siddhant spoke about the film and revealed that his parents saw it. He said that the film starts off where most romcoms end. He added that the film shook him and he had to unlearn everything personally and also as an actor. Talking about how his parents reacted to the movie, Siddhant revealed, “I didn’t sit with them. I was sitting in one corner and they were in the other.” Also Read – Kiara Advani poses in a backless thigh-high slit dress; fans say, ‘She looks like Deepika Padukone’ – watch video

He went on to say that after watching the film he returned home in his car and didn’t even travel back with them. He said that he rushed to his room and went to bed. He added that dad knocked and came in. Said the actor, “He wanted to talk about the film because he loved it, but I just wanted this day to pass (laughs!), so we did speak about it later on the phone. That’s when he said, ‘Yeh film samaaj ka darpan hai. Ismay kuch sahi galat nahi hai.’ (It holds a mirror to the society). Koi message nahi de rahe hai hum. The world has changed and these kinds of stories exist. We are not promising you a Dilwale Dulhania Le Jayenge or Yeh Jawaani Hai Deewani.” Also Read – Gehraiyaan and Liger star Ananya Panday gears up for YET ANOTHER hatke project; Read Exclusive Details

Meanwhile the makers of the film hired an intimacy director Dar Gai. In an interview to Hindustan Times, he said that during the workshops all the actors were cooperative and were absolutely equal to each other, in terms of their eagerness to do something new. He said that it was very inspiring for him. Also Read – Gangubai Kathiawadi trailer: Did you spot THIS similarity between Alia Bhatt and Deepika Padukone from Ram Leela?