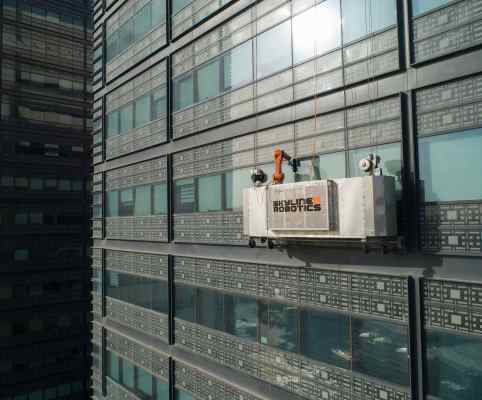 I would put window washing fairly high (so to speak) on the list of jobs it makes sense to automate. Certainly the gig qualifies as both dirty and dangerous — and surprisingly, doesn’t come with all that much in the way of hazard pay. That’s something you would think might come standard with a job that requires you to dangle hundreds of feet in the air.

Skyline made some news last year  with the delivery of Ozmo, a robotic system designed to clean those hard to reach spots on the sides of skyscrapers — façade maintenance, as it’s known. At its base, the system is a pair of Kuka industrial robotic arms mounted on a suspended platform.

It uses lidar to determine the proximity of the glass it intends to clear, while relying on force sensors to insure it doesn’t break anything in the process. Baked-in algorithms ensure a steady robotic hand under extremely windy conditions, while the company says it’s capable of recalculating an optimal cleaning path hundreds of times per minute.

Today the New York-based startup announced $6.5 million in what it’s deemed “pre-Series A” funding (honestly, these funding round labels are beginning to lose any meaning they may have had). Skyline Standard Holdings led the round. The round brings the firm’s total funding up to $9 million.

“This successful funding round and first Ozmo deployment shows that the demand for our product and services are not just tangible and felt by investors, but that there’s a major business opportunity ahead of Skyline,” says CEO Michael Brown. “The conviction of our team is being matched by the investment community.”

Certainly there’s plenty of opportunity there with tens of millions of windows that need cleaning in New York City, alone.