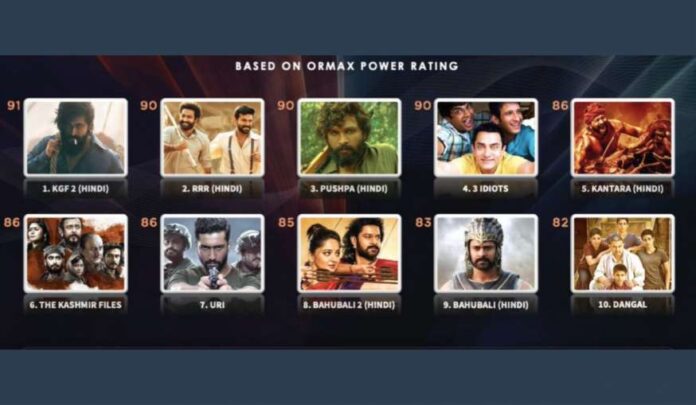 According to Ormax, films from South continue to top the list of most loved Hindi theatrical films of all time. In such a situation, it is a perfect example of success that despite the release of many films in this industry, the films of Tollywood industry are at the top of the film charts after their release. Be it Bollywood or Tollywood industry, this year these films have rocked the box office. On the other hand, what to say about South movies, these top 10 films have been liked by the people a lot. Know what is the condition of Bollywood films….

This year was no less than a gold year for the South Film Industry. According to the report of Ormax, these films of Aamir Khan are still very much liked by the people. Let me tell you, when ‘3 Idiots’ released in 2009, this interesting and engaging story based on the education system received immense love from the audience to create records at the national and international box office. ‘Dangal’, on the other hand, released in 2016 and was based on the inspirational real life story of former wrestler, Mahavir Singh Phogat and his dream of winning a gold medal for his country at the Commonwealth Games. These films paved the way for worldwide success and created history with their stupendous blockbuster successes.

‘KGF Chapter 2’, directed by Prashant Neel, is a sequel to ‘KGF’. South’s superhit actor Yash was seen in this film.

Pushpa: The Rise
Allu Arjun’s film ‘Pushpa’ has earned a lot at the box office. People have liked this film so much that its second part is going to come next year, the shooting of the film is going to start from 12th December.

3 Idiots
Released in 2009, the film ‘3 Idiots’, an interesting and engaging story based on an education system, received immense love from the audience and went on to create records at the national and international box office.

Kantara –
Kantara, directed and starring Rishabh Shetty, has ruled the box office for a long time. This film also created a lot of buzz and made Rishabh Shetty a pan India star.

The Kashmir Files
The film ‘The Kashmir Files’ is based on the historical incident of Kashmiri Pandit exodus in the 90s. It is said that they were massacred there to remove the Pandits from Kashmir.

URI –
Vicky Kaushal’s film ‘Uri’ is based on the real incident of surgical strike. On September 2016, India took revenge of the Uri attack from Pakistan by crossing the LoC. Vicky Kaushal has appeared in the role of an Indian soldier for the first time.

Bahubali 1/2 –
Prabhas-Anushka Shetty’s film Baahubali 2: The Conclusion, which came in 2017, created a lot of buzz at the box office. The film did a business of 1810 crores. While its first part Bahubali: The Beginning, which came in 2015, earned Rs 650 crore.

Dangal –
It is common for Bollywood’s Mr. Perfectionist Aamir Khan’s films to do business of 400-500 crores. Aamir’s films, which work closely on selected films, make a splash not only in India but also abroad. Be it ‘Three Idiots’, ‘Dhoom-3’, ‘Dangal’ or ‘Secret Superstar’.

Pushpa 2: There will be a blast in ‘Pushpa 2’! This actor will be seen with Allu Arjun in the film