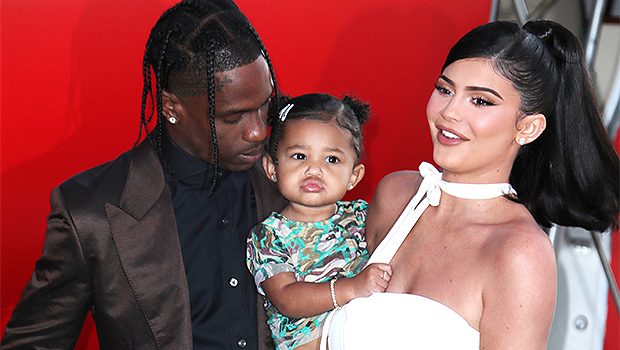 Stormi Webster made an appearance in one of Travis Scott’s recent IG stories and the dad is joking about how deceitfully ‘sweet’ the little one can be for the camera!

Travis Scott just shared an adorable photo of daughter Stormi Webster cheesing for the camera, but he’s here to let fans know: she’s not always this innocent! “She be mugging at night sweet in the morning lmaoo” Travis hilariously wrote over the post of Stormi having the sweetest smile in the world while seated on what appeared to be a private plane. All parents definitely know what he’s talking about!

Stormi’s parents love catching her behind-the-scenes in the most adorable pics and videos! Back in January, after a brief hiatus from Instagram, Travis shared a stylish snap of the little one in a Gucci coat. The “Escape Plan” rapper posted the too-cute pic (below) of his 4-year-old baby girl smiling as she donned a maroon visor and black leather boots to complete her super chic ensemble!

Stormi also popped in to one of mommy’s recent videos on March 11 as the beauty mogul was promoting her new lip product, Lip Lacquers, on her Instagram Stories. “So, I know I’ve been M.I.A for a while,” Kylie, who gave birth to she and Travis’s son Wolf on Feb. 2, said. Before the mom-of-two could continue, Stormi then made an appearance in the frame behind her. “Stormi wants to be in this,” she said with a smile.

When the reality star decided to end the video and begin another, Stormi then decided to climb further up next to her mom and rest her head against Kylie’s. “Get outta here,” the Keeping up with the Kardashians star told her daughter. Kylie went on, “Let me do this for two seconds, Okay?” Stormi then sweetly responded, “Ok,” and removed herself from the camera frame so that her mom could keep talking to her followers.

Kylie continued on. “I launched a new lip product. They’re called lip lacquers, but I haven’t been doing my makeup, so I haven’t been able to show you guys, but now I am getting back to doing my makeup.” She also went on to clarify that the two were parked in the driveway — hence why Stormi was moving freely about. We never get tired of these adorable cameos!