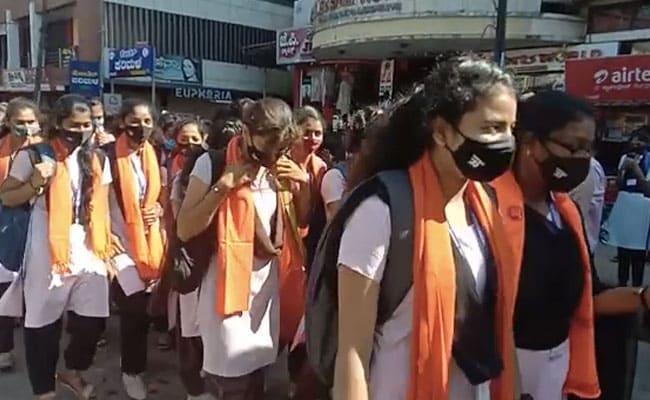 College rules allow students to wear the hijab in class but not during lessons.

Amid heated protests in Karnataka by some Muslim women to be allowed to attend classes wearing a hijab, a group of students again marched to their college wearing saffron scarves. Videos from Kundapur in the Udupi district show boys and girls donning the scarves over their college uniforms and raising slogans of “Jai Shri Ram (praise Lord Ram)” while going to college.

Muslim students can be seen in a separate queue wearing headscarves over their uniforms. A police vehicle is also seen stationed near the college.

Police personnel were breaking up groups of saffron-clad protestors who gathered near what appears to be a market area and raised slogans, the videos show.

Earlier videos from the coastal town of Kundapur showed students of the Government Junior College in headscarves, arguing with their principal, Ramakrishna GJ after they were denied entry into the campus.

College rules allow students to wear the hijab in class but not during lessons, according to officials.

But Karnataka Home Minister Araga Jnanendra said children should “neither wear the hijab nor saffron scarves” in school.

“Schools are the place where children belonging to all religions should learn together and imbibe a feeling that we are not different, and all are children of Bharat Mata,” Mr Jnanendra had told reporters.

“There are religious organisations who think otherwise, I have asked the police to keep a watch on them. Those who cause hindrance or undermine this country’s unity, they have to be dealt with,” he had said.

In BJP-ruled Karnataka, this is the second such confrontation after protests started a month ago at the PU Girls College in Udupi. Students there are still fighting to be allowed to sit in class wearing a hijab.