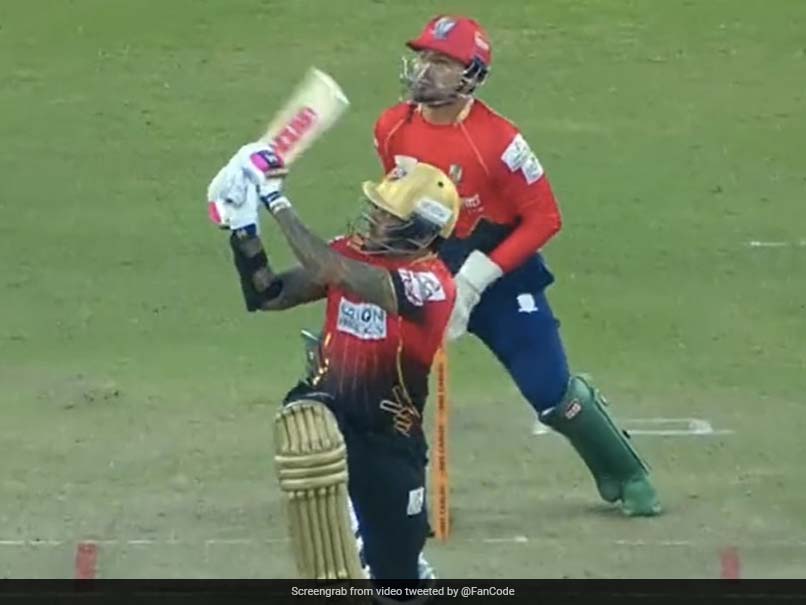 West Indies star Sunil Narine was at his very best with the bat in the Bangladesh Premier League (BPL) final in Mirpur on Friday as he hit a blistering fifty. Playing for Comilla Victorians, Narine scored 57 off 23 balls to give his side a fiery start in the summit clash against Fortune Barishal at the Shere Bangla National Stadium in Mirpur. Narine hit five fours and five sixes in his stroke-filled innings that gave Comilla Victorians a flying start. He eventually was dismissed for 57 by Mehedi Hasan Rana.

Here is a video featuring Narine’s best strokes during his 57-run knock.

runs in just balls! We love to see it!
The ball has been bouncing off #SunilNarine‘s bat and landing in the stands.

Meanwhile, Narine, who was instrumental in ensuring Kolkata Knight Riders’ IPL title wins in 2012 and 2014, says the franchise is like his second home and has backed him through thick and thin.

From being reported for suspect bowling action in 2014 during the Champions League T20, which put his entire career at stake, to experiencing a similar incident in IPL 2020, Narine’s journey in cricket has been nothing less than a roller-coaster ride.

“There’s no other place I’d like to be than KKR because I have played all my cricket here,” Narine has said in a short-film “The Comeback King” that was released last year.

The 33-year-old was retained by KKR for Rs 6 crore ahead of the new season.

“I would love to continue representing the franchise It’s a home away from home, my second home. So, I hope it can continue,” added Narine.

Narine has been an integral part of the success of KKR for the past decade and the short-film by the franchise depicts the spinner’s incredible journey as a cricketer overcoming all odds.

“It (being called for illegal bowling action in 2020) was tough! But at the end of the day, cricket was never easy for me. I had to work for everything I have. So, it was just like another stepping stone where I had to dig deep, work hard and come out on top,” Narine said.