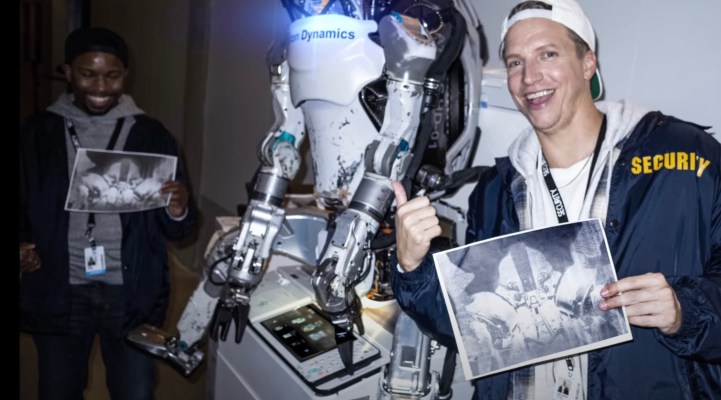 Funny how these things arrive in fits and starts. Last week’s newsletter left me stumbling to cram everything into the allotted column space. Things are considerably more quiet this week, which can only mean that we’re heading for another deluge. Hey robotics world, if you could spread out the news a bit more, you’d be doing me a solid. Still, plenty of stuff to discuss this week, from radiation detection to some familiar robots going full-on frat bro.

We’re kicking things off with another interview this week. This time it’s a conversation with SoftBank Robotics Senior Vice President & General Manager Brady Watkins, who heads up SoftBank Robotics America. Watching the firm’s operations in the space has been fascinating from the outside.

It was formed out of the investment group’s acquisition of French startup Aldebaran Robotics, makers of the research robot Nao. That gave rise to Pepper, the longtime humanoid face of the firm — though production was halted on that product last year. A bigger success story of late has been Whiz, a cleaning robot whose adoption has been accelerated during the pandemic (for reasons we’ll be getting into in a moment).

This interview has been edited for length and clarity.

SoftBank Robotics seems to serve as kind of an accelerator for developing some of these brands in-house.

“Go-to-market” and “commercial” are terms we focus on. When you think of how you take an investment in robotics or take a product to market, making sure that you focus on the critical factors around commercialization and go-to-market are really critical. That’s our main focus and remit. How do you make sure you take something all the way to completion? Enterprise-grade, smart robotics — that’s where you really start to create commercial adoption, so we think about that as our focus. And then how do we work back, in terms of understanding the larger market trends and where we see a lot of growth on the macro view and how do we tie into it from a commercial accelerator?

What kind of timeline does an organization like SoftBank look at it when it comes to bringing [robotics] to market?

At every iteration of a new product, we see the adoption curve shrink. As time progresses, two things are happening. One, the technology is expanding at a rate that’s really exciting. We’re starting to see things like technology, connection, components — all of that is starting to be more accessible and digestible, and a value proposition. Specifically, we can consume these parts that actually create a good value proposition together. The second piece for us is, given all the investments we’ve done, we’ve really focused on adoption as a principle. Adoption is understanding it’s not the tech, it’s not a product feature — it’s a solution. How do we adopt the product within an environment that people are the final component of success.

How has the pandemic accelerated not only adoption, but time to market?

There are two inherent things that have shifted. One, health and safety has elevated importance. How do I ensure the health and safety of whatever location I’m in — whether it’s a hospital, senior care, hospitality, university — how am I now ensuring that I have a place that is safe and healthy for me? The second challenge is, that with work transformation that’s happening, you have labor markets that are extremely volatile. Those two components have made this a priority. I have to deliver a safe environment with consistency and certainty like proof-of-performance. And I have a challenge where I can’t deliver that unless I have a toolset that can be consistent.

Is Pepper done as a standalone project?

It’s not fair to say it’s “done,” because we have clients that are utilizing it and coming out with new use cases for it. We’ve paused production on Pepper. We have enough created. We’re continuing to sell it into clients. It has usage and applications. It’s great in school systems. It still has its use case and we’re going to continue to allow that to pursue. I think in terms of scalability and our focus — that’s one product and we’re going to continue to support it and as the market shifts, we can, and then we continue to grow in other areas.

What — if any — is SoftBank’s approach to consumer/home robotics?

I think consumer is really hard. What we focus on is where smart robotics can successfully adopt in scale in the commercial space. Where we see investment, where we see value prop and adoption, we’re still at a contract value that is above a consumer scenario in the near term. So that’s where we’re focusing — where we see the biggest growth. I think there are huge developments in home automation, but you also have a lot of big players from a saturation perspective. So, for us, the open space and the ability to scale is still on the commercial side versus the consumer. We never say never, but for us, we want to follow the trends, in terms of where there’s an opportunity and I think smart robotics — the mobility of it — really sits in commercial versus consumer.

One of the more interesting bits of funding to arrive this week comes to us courtesy of Q5D. The pandemic and resulting supply chain bottlenecks have shone a light on the need for some more efficient manufacturing processes. SOSV/HAX hardtech startup alum Q5D seeks to employ robots to perform one of the more complex hardware manufacturing tasks. The firm announced a $2.7 million seed led by Chrysalix Venture Capital this week aimed and accelerating its automated process of producing wiring harnesses for electronics.

“This is a time of great change — the rapid electrification of our transport systems and the increasing function of everything from washing machines to mobile phones means that wiring is becoming more complex and labor intensive,” says co-founder and CEO Steve Bennington of the tech. “The way the world has made wiring for the last 80 years has to change.”

Tsunami waves on March 11, 2011 smashed into much of northwest Japan, such as here in Fukushima prefecture. Image Credits: SADATSUGU TOMIZAWA/AFP via Getty Images

The 2011 Fukushima nuclear disaster is often pointed to as a prime example of conditions ideal for robotic scouting. And, indeed, we’ve seen a number of expeditions over the years using remote-controlled technology that allows inspectors the ability to examine progress at the site from a remote distance.

The latest round — which recently picked up after a delay from last month — finds Tokyo Electric Power Company Holdings utilizing submersible robots to examine the state of a damaged reactor and collect fuel samples. The action comes five years after a similar probe. Further examinations will be conducted by five robots developed by Hitachi-GE Nuclear Energy and the International Research Institute for Nuclear Decommissioning. 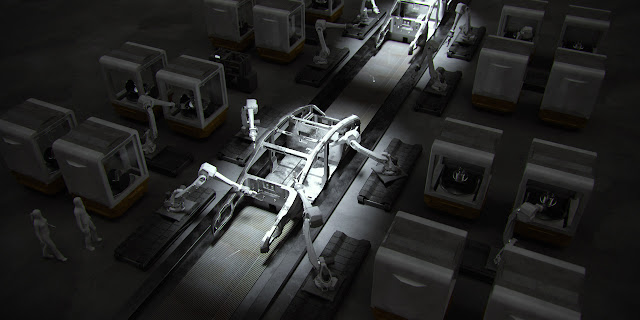 Just under a year after emerging from stealth, Symbio announced this week that it’s working with Toyota North America to automate assembly robots for the company’s Camry, RAV4, Sequoia and Tundra lines. In particular, the firm is highlighting the work being done on its EV lines, using real-time sensor data to help make the assembly systems more adaptable.

Given the massive press push Boston Dynamics has been making in recent months — from Katy Perry to Jimmy Fallon — it was just a matter of time before the robots appeared in a Super Bowl spot. With the post-Brady Patriots eliminated after a short post-season run, the robotics firm teamed up with fellow Boston-area institution Samuel Adams for a spot that features Atlas photocopying its robotic ass and a cameo from founder and chairman, Marc Raibert.

Listen, my team didn’t make it to the Super Bowl either this year. Perhaps we can commiserate by all signing up for this free weekly robotics newsletter.