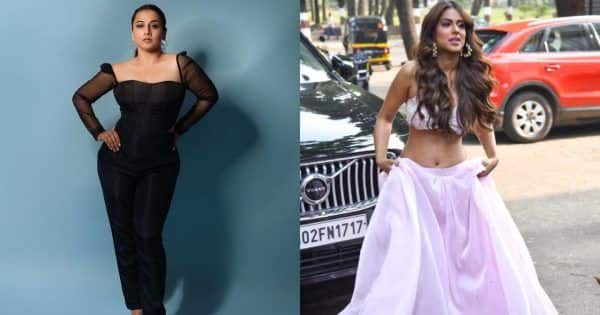 Monday is here, and it is time to browse through the fashion outings of the week. With the pandemic again looming on us, a lot of events have been cancelled. Talking about the fashion offenders, Nia Sharma landed up on the sets of Bigg Boss 15 in a light purple skirt and top. The dress just did not photograph well. Vidya Balan who is on a diverse style trip nowadays donned a pair of black pants with a corset top. It did not flatter her much. Take a look at the worst dressed celebs of the week… Also Read – Bigg Boss 15: Nia Sharma shows off her toned mid-riff in a purple gown — view pics

Nia Sharma
Nia Sharma is one of the hotties of Indian TV. The actress had gone to promote her song Phoonkh Le on the sets of Bigg Boss 15. Nia Sharma wore a light purple skirt with a crop top for the same. The look was disappointing given that Nia Sharma has given us much better looks. Also Read – Salman Khan, Kareena Kapoor Khan, Shah Rukh Khan and more: Celebs who showed their generous side and worked for free in certain films

Vidya Balan
Vidya Balan is seen sporting different looks of late, and we are happy. However, the actress’ all black outfit of black pants, a corset type top and PVC sandals did not impress much. Even in western outfits, Vidya Balan has been styled in much better manner. Also Read – Nia Sharma, Pearl V Puri, Parth Samthaan and more — Comebacks of 10 TV actors we are waiting for in 2022

Rani Mukerji
The actress was seen at a school in the city. She was wearing a bottle green dress with lace. It was a simple look. Rani Mukerji’s styling has been lacklustre of late, and this was no different.

Sakshi Chopra
Sakshi Chopra who is known as a model and songwriter is in Mumbai. The actress was seen in a netted sundress in the city. Well, keeping aside the in your face risque quotient of the outfit, it was hardly chic.

Tina Datta
The actress has done a hot photoshoot with noted lensman Amit Khanna. While we love how she romances the camera, this bodysuit does not do justice to her frame.

These celebs failed to hit the right notes when it came to their sartorial outings this week. What do you feel about their outfits?