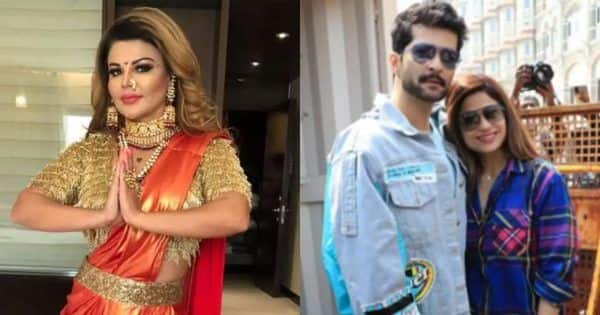 The big TV news of the day is that Rakhi Sawant has announced her split from Ritesh Singh. She said that she came to know a lot of things about him inside Bigg Boss 15. Rakhi Sawant said that it was an amicable decision to end the marriage, which wasn’t legally registered in the first place. Raqesh Bapat was seen with Shamita Shetty, Shilpa Shetty and their mom Sunanda as they headed to Alibaug to spend Valentine’s Day. Do we hear about an engagement soon? ANI reported that a fire broke out on the sets of Bigg Boss 15. Luckily, no casualties were reported as four fire engines doused the fire.. Also Read – Rakhi Sawant declares SEPARATION from hubby Ritesh; netizens say ‘bhaade ka Pati, STOP this drama’

Rakhi Sawant announces separation from Ritesh
Rakhi Sawant made an announcement on Instagram that her marriage with Ritesh is over. She said that it was an amicable decision. Rakhi Sawant said she came to know a lot of things when she was inside the house. As we know, Ritesh’s estranged wife said that he was an abusive man and a wife-beater. She also said that he is a liar when it comes to his financial status. Rakhi Sawant said that she tried to make things work but that did not happen. Mahima Chaudhary and Rajiv Adatia sent her love. Also Read – Karan Kundrra goes an extra mile to prevent oops moment for Tejasswi Prakash; Naagin 6 actress goes aww – watch video

Fire catches the sets of Bigg Boss 15
ANI reported that a fire broke out on the sets of Salman Khan’s Bigg Boss 15. It seems four fire engines were sent to Goregaon’s Film City to douse the flames. However, no casualties have been reported. The show was shot there till the start of February 2022.

Raqesh Bapat heads to Alibaug to spend Valentine’s Day with lady love Shamita Shetty
Raqesh Bapat has headed to Alibaug with Shamita Shetty, Shilpa Shetty and their mom Sunanda to ring in his birthday. This is his first birthday with the Shetty clan. The couple are now dating. Fans are wondering if we can hear an engagement news soon.