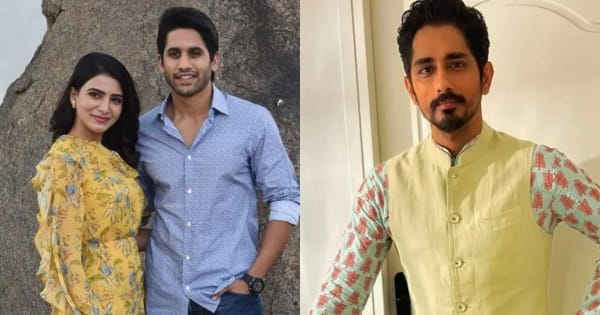 Tamil and Telugu actor Siddharth is currently in the headlines because of his tweet on Badminton player Saina Nehwal. He called for a controversy when he replied to Saina Nehwal’s tweet on PM Narendra Modi’s security lapse incident. He got called mysoginist and more for the use of word ‘cock’ in his tweet. Later, he clarified on the same and wrote that he was making the use of idiom – ‘cock and bull’. However, netizens bashed him left, right and centre and he even got in trouble with National Commission of Women. Amidst this, his old tweet allegedly targeting Samantha Ruth Prabhu has gone viral on social media. Also Read – From Pooja Hegde to Rashmika Mandanna: 6 South beauties to watch out for in 2022

It was right after Samantha Ruth Prabhu and Naga Chaitanya announced their divorce that Siddharth had tweeted about ‘cheaters’. He wrote, “One of the first lessons I learnt from a teacher in school… “Cheaters never prosper.” What’s yours? (sic).” Fans had quickly come to a conclusion that he was targetting Samantha Ruth Prabhu as several reports suggested that they were a couple in the past. This old tweet has once again come to fore amidst Saina Nehwal row. Also Read – WTF Wednesday: Sorry, Jacqueline Fernandez, you’re expecting ‘understanding’ from a world that believes ‘it’s always the woman’s fault’

Didn’t @Actor_Siddharth also speak bullshit about Samantha after her divorce with her husband?

Fallen Star & Feminist (?) #Siddharth is an habitual offender! He leaves none to slur, that to satisfy his paraphilic & ungentlemanly ego!
This is his response on the untimely divorce of actress #Samantha.

This is another example, that proves how low a person can stoop down. pic.twitter.com/fPxbbDffw4

this was his reaction for his ex marrying another man..quoted from a tamil comedy told in a different context..good that he’s finally caught
translation: If Nagoor biriyani (samantha) is destined to be had by a street dog in Ulundurpettai (Naga chaitanya), then nobody can stop it pic.twitter.com/raqi4bqew1

Siddharth has now issued an apology to Saina Nehwal. He wrote, “I am a staunch feminist ally and I assure there was no gender implied in my tweet and certainly no intent to attack you as a woman. I hope we can put this behind us and that you will accept my letter. You will always be my Champion. Honestly, Siddharth.” Also Read – Siddharth issues a formal apology to badminton ace Saina Nehwal after sexual slur controversy; says, ‘You will always be my Champion’