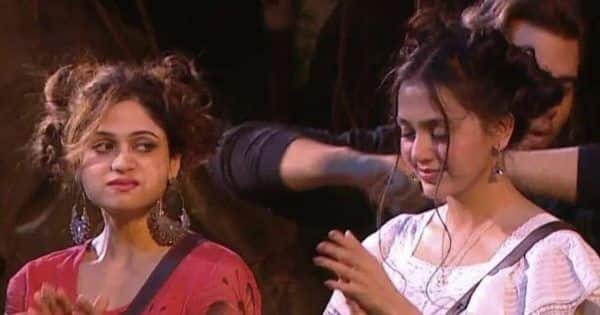 During the final task of Bigg Boss 15, Tejasswi Prakash had called Shamita Shetty an aunty after the latter got on top of Karan Kundrra to give him a massage. Later, when Shamita was seen giving a back massage to Prateik Sahajpal, an angry Tejasswi, again said, “That aunty is on top of this one too.” This bothered Shamita a lot and even refused to accept Tejasswi’s apology. While many people including Shilpa Shetty has defended Shamita over the aunty remark, Tejasswi was asked if she regrets using the term. Also Read – Tejasswi Prakash says Karan Kundrra is insecure, Kapil Sharma takes a dig at Bipasha Basu-Karan Singh Grover and more Top TV News Today

“It was a slang term used at the moment. Have you seen Shamita? She’s a hot-looking girl, who would actually call her an aunty? And the minute I felt that she didn’t like it, I right away took it back,” Tejasswi told News18 in an interview. Also Read – Naagin 6: Ekta Kapoor REVEALS she never met Tejasswi Prakash before Bigg Boss 15; shares how she signed her

The Naagin 6 actress argued that there were many mean things said about her on the controversial reality show but she never created a fuss out of it. “There are many things that were said to me and I never made a big deal out of them. One needs to know the moment and what context and manner the remark was made in and though I apologized, there were never any apologies that came to me,” she added. Also Read – Bigg Boss 14 contestant Eijaz Khan admits to cheating in a relationship; says ‘Maine galti ki…’

Tejasswi further said that she was never insecure of Shamita’s friendship with her boyfriend Karan Kundrra “but you are bound to keep your allies close because the game can change any day and any minute which can change whether you reach the end or not. And for me keeping my bond in fact with my people was important.”

At the grand finale, Salman Khan declared Tejasswi Prakash as the winner of Bigg Boss 15. She went home with the Bigg Boss trophy and a cheque of Rs 40 lakh. The favourite to win the trophy, Pratik Sehajpal, had to be content with the runner-up slot while Karan Kundrra was No. 3. However, several Twitter users expressed their displeasure at Tejasswi being titled the winner as they wanted to see Pratik as the winner. In addition, celebrities too shared their opinion on Pratik losing to Tejasswi.