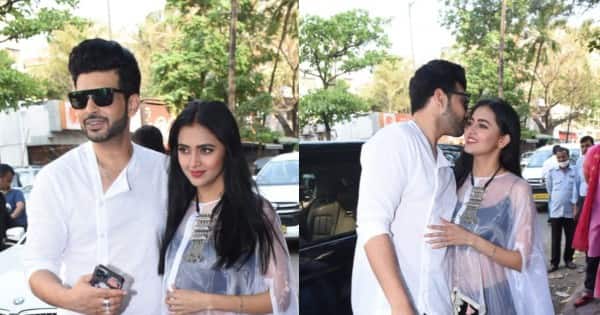 Bigg Boss 15’s lovebirds Karan Kundrra and Tejasswi Prakash arrived in style at Ankita Lokhande and Vicky Jain’s star-studded Holi party. The two posed for the paps and Karan gave a peck on her cheeks. Karan looked dapper in white kurta and black pyjama. He added swag to his look by wearing black shoes and stylish eyewear. While Naagin 6 actress Tejasswi looked pretty in a black co-ord set that included a bralette and a pair of trousers. She completed her look with a sheer white cover-up on a top, silver necklace, and left her long tresses open. Also Read – Trending TV News Today: Tejasswi Prakash’s Pratha enters ‘Most Liked Hindi TV Characters’, Ankita Lokhande-Vicky Jain’s Holi bash and more

As paps started clicking Karan and Tejasswi together, the two hugged each other. TejRan fans are going gaga over their pictures and videos. Paps called them ‘bhaiya and bhabhi’ and their fans beamed with joy. One user wrote, ‘Ab ho gayi tejran fam ke liye happy holi’, while other wrote, ‘They are beautiful souls . No wonder they r so loved #TejRan’. Another user wrote, ‘My babiesss are looking super gorgeous together as always’. Also Read – Holi 2022: Ankita Lokhande-Vicky Jain throw first festive party post marriage; Ekta Kapoor, Monalisa, Aly Goni-Jasmin Bhasin and more make a SPLASH – view pics

In a recent interaction with ETimes TV, Tejasswi revealed her plans about celebrating first Holi with Karan and said, “Knowing Karan, I know he will make it special. He loves the festival so much and I know when I am with him, I will enjoy it too.” Also Read – Amid rumours of trouble in marriage, Charu Asopa and Rajeev Sen celebrate first Holi with their daughter Ziana

On the work front, Karan and Tejasswi were seen together in their first music video ‘Rula Deti Hai’ which managed to win hearts across the globe. Post winning Bigg Boss 15, Tejasswi has been busy shooting for Naagin 6. While Karan also has a few music videos in his kitty. He is currently seen as a jailor in Kangana Ranaut‘s reality show ‘Lock Upp.’