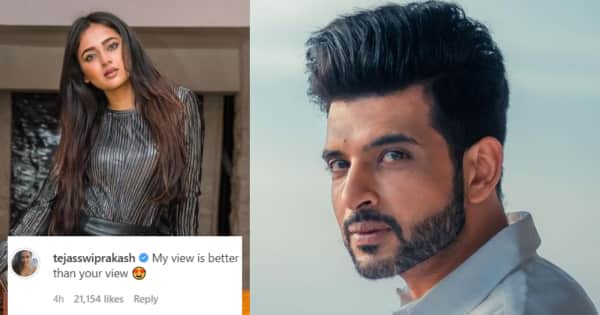 Karan Kundrra and Tejasswi Prakash are dating for real and the two of them are painting the town red with their love. Tejasswi Prakash and Karan Kundrra have also taken social media by storm. The Bigg Boss 15 contestant recently dropped some handsome pictures on his Instagram handle sending his fans into a tizzy. Karan is seen wearing a white shirt and looking out. He has soft stubble and a dreamy look. He captioned the post saying, “The view though,” However, it is Tejasswi’s comment on Karan’s post that has become the talk of the town. Also Read – Naagin 6: Tejasswi Prakash’s fans are UNHAPPY with less screen time of Pratha; demand more scenes of her with Simba Nagpal – view tweets

Tejasswi Prakash dropped a flirtatious comment saying, “My view is better than your view.” We second that, Tejasswi. And a lot of Karan Kundrra admirers too. Karan’s fans are having a meltdown over his pictures. Karan looks very handsome. Just like his character, Arjun from Kitani Mohabbat Hai. Check out Karan post and Tejasswi’s comment on Karan’s post below: Also Read – Naagin 6 19 February 2022 written update: Pratha aka Tejasswi Prakash misunderstands Rishabh; Shesh Naagin kills minister and gets a major clue

Meanwhile, Tejasswi Prakash has been busy shooting for Naagin 6. However, the actress’ hectic working schedule has not come in their way of spending time together. Karan Kundrra has been dropping by Naagin 6’s set to pick her up after work and meet her. TejRan fans have been going gaga over their relationship.

In conversation with BollywoodLife.com, Tejasswi Prakash was asked to list 5 things that she likes about Karan. She said, “What’s not to like about Karan Kundrra really, he is just so loving smart knowledgeable there is so much there to learn from him every single day. I see myself growing with him every day emotionally and spiritually. He is all hearts, and I can see when he says he never felt this before I can feel it because every time, he is a certain way he himself is surprised by the way he reacts with the way he has become.”