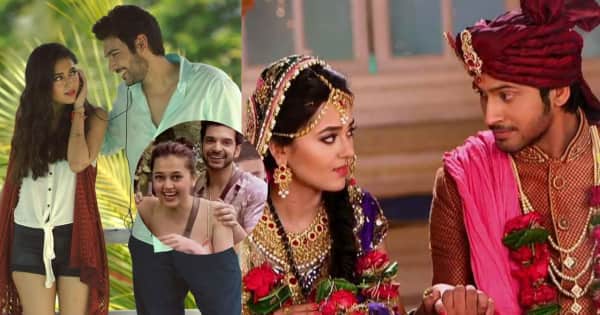 Tejasswi Prakash is all set to romance Simba Nagpal in Naagin 6. The Bigg Boss 15 winner is dating Karan Kundrra in real life. Now, a fan handle has shared a compilation of videos in which we see Tejasswo with her former co-stars. The video includes clips of Tejasswi with Shivin Narang, Namish Taneja, Varun Kapoor, Kunal Jaisingh, Rohit Suchanti and Aashim Gulati. The fan made edit features Tejasswi’s co-star admiring her charm and goofiness while she is talking. Now, TejRan fans are tagging Karan Kundrra in the post and have been teasing him. Ever since Karan and Tejasswi have started dating, their relationship has been the talk of the town. The two have been painting the town red with their love whether they can. And fans love to ship them. However, it won’t stop them from teasing them either. Karan and Teja are very possessive about each other and it’s kinda cute for their fans. And this video will surely make Karan jealous. Also Read – Naagin 6: THIS handsome Kundali Bhagya actor joins Tejasswi Prakash-Simba Nagpal starrer