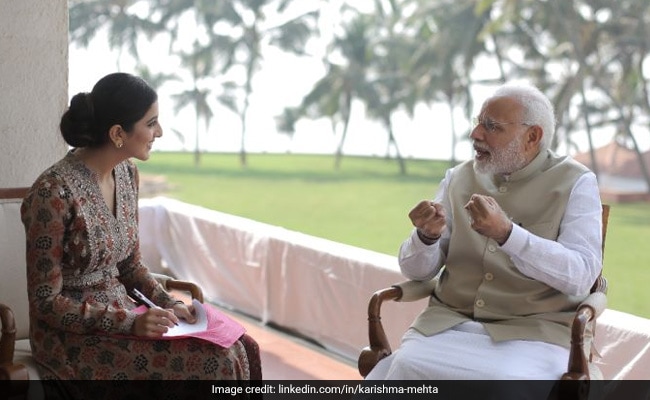 Karishma Mehta, the woman behind Humans of Bombay, interviewed PM Modi in 2019.

Karishma Mehta, the woman behind Humans of Bombay, has shared some details about her experience of interviewing Prime Minister Narendra Modi three years ago. The prime minister of the country and the 27-year-old interviewer had one thing in common – they are both Gujarati – which led to PM Modi’s opening sentence when he met Ms Mehta. “Kem cho Mehta ji (How are you, Mehta ji?)” PM Modi asked her.

Ms Mehta, who has interviewed and profiled several leaders, celebrities, politicians and industrialists for Humans of Bombay, says that her short interview with PM Modi has a special place among all these.

“I was 27 when I was given the opportunity to interview the prime minister of our country,” Ms Mehta wrote in a LinkedIn post yesterday. “The interview was about 22 minutes- 22 minutes that changed the trajectory of my career,” she said.

She explained that the interview with PM Modi received a lot of hate on social media and taught her that her work should speak for itself.

“What followed [the interview] was recognition for our work, yes, but also a whirlwind of hate (the cover of a popular youth magazine put us on the cover with a scathing title), accusations and a whole lot of unidirectional slander,” Ms Mehta wrote. “I guess that was the point in my life that I learned silence is golden and the handwork should always do the talking.”

The Humans of Bombay founder concluded her short post by saying she would share more about her experience of interviewing the prime minister at a later date, but did reveal one interesting tidbit before signing off. “Will share my experience of the interview another time, but the first thing he asked me was, ‘Kem cho Mehta ji?'” she wrote, adding a smiley face emoji at the end.

In 2019, Humans of Bombay carried an interview with PM Modi in which he spoke about his childhood, his family and his ascent to power, among other things. The interview was published in five parts on their Facebook and Instagram pages.