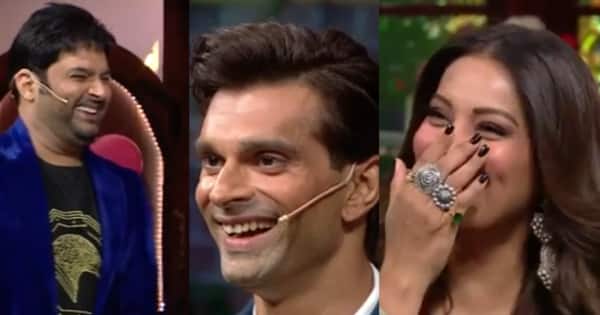 In the upcoming Valentine’s Special Weekend on The Kapil Sharma Show, we will see Karan Singh Grover and Bipasha Basu gracing the sets. The two lovebirds will entertain everyone by sharing bits and pieces from their marital life. And of course, we will see Kapil Sharma taking a dig at them. There will also be a lot of poll khol moments and mush romantic moments in the episode. We will see Karan getting down on his knees while Bipasha will adore him with hugs. And the romantic atmosphere won’t stop Kapil Sharma from taking a dig at the couple. Also Read – Gehraiyaan: Kapil Sharma gets inspired by Deepika Padukone-Siddhant Chaturvedi’s romance? Kisses Ginni Chatrath at the screening – watch video

Y’all know how both Karan Singh Grover and Bipasha Basu are fitness freaks. Kapil will praise both Karan and Bipasha for looking the same they did 10 or 5 years back. And, in the same context, Kapil will take a jibe saying, “Ye wo log hai jo apni suhagrat mein dhudh nahi protein shake pike sote hai.” Karan and Bipasha are left in splits of laughter after the same. Later, we see Kapil talking about Karan’s fondness for getting inked. Karan Singh Grover, popularly known as Dr Armaan from Dill Mill Gaye, has a lot of tattoos on his body. Also Read – Taarak Mehta Ka Ooltah Chashmah continues to entertain fans more than Anupamaa and more: Check Top 10 most-liked Hindi TV shows by Ormax

Kapil jokingly asks him how many more tattoos he needs to have to stop wearing clothes. Bipasha comes to his rescue saying that won’t happen at all as Kara loves clothes. However, she takes a jibe at him saying that he also loves to be without clothes. Check out the hilarious promo of Karan and Bipasha on The Kapil Sharma Show below: Also Read – The Kapil Sharma Show: Before Akshay Kumar, THESE 5 celebs had refused to attend the show

In the promo, we also see Archana Puran Singh asking Bipasha and Karan as to what usually they fight about. Karan says thy fight whenever he goes wrong. Archana asks him to give an example to which Karan says, “Main har baar alag galti karta hu.” It leaves everyone rolling in laughter.