The Station is a weekly newsletter dedicated to all things transportation. Sign up here — just click The Station — to receive it every weekend in your inbox.

Hello readers and Happy New Year (I was gone last week): Welcome to The Station, your central hub for all past, present and future means of moving people and packages from Point A to Point B.

Welp, CES 2022 came and went. And while other news did happen this week, we’re gonna give you the ultimate CES breakdown. Hang on for this galaxy brain adventure.

And nope, I did not attend. This was the second year in a row — after years and years of walking the packed convention center and the rows of startups jammed in at Eureka Park — that I didn’t go in person. It was sad, as I do love to meet up with founders and test out new tech, but then again …

Before you jump in this CES 2022 wonderland. Sec. Pete Buttigieg wrote an op-ed that TechCrunch ran last week — the same day he made prepared remarks (virtually) at CES 2022.

Oh and one final note, Jim Motavalli, an author and EV expert, wrote a weekend feature for us that ties in perfectly with all of the tech shown off at CES. It’s all about what he describes as “feature bloat.”

As always, you can email me at kirsten.korosec@techcrunch.com to share thoughts, criticisms, opinions or tips. You also can send a direct message to me at Twitter — @kirstenkorosec

Here’s a snippet from a lengthy roundup that Rebecca Bellan and I put together. The upshot? Smarter, connected, more powerful ebikes and scooters were the top micromobility trends of CES 2022.

We also noticed that a lot of the products that were show, weren’t actually new. But even most of those EV products included more powerful onboard computers that are synced up to apps that can help riders do things like find their vehicle, track fitness goals and control bike functions like locks and lights.

Some of the highlights:

Bosch showed up with its connected smart e-bike system, which isn’t exactly new, but it was awarded honoree status at the CES Innovation Awards.

Cake announced new updates to its Ridecake connectivity app, including features to allow professional fleet managers to monitor and manage their vehicles.

Delfast, the American-Ukrainian startup, rolled out an upgraded model of its electric Top 3.0 bike, which the company claims can go up to 200 miles on a single charge.

Moonbikes showed off its electric snow vehicle. And while it is not exactly new, this was really the first time people really got to check it out in person. It’s a single-track snowmobile that has a 3 kW (4hp) electric motor and reaches a 26 mile-per-hour top speed.

Niu showed up this year with its new BQi-C1 e-bike, a vehicle the Chinese e-scooter company has already teased but finally shared pricing and tech specs at CES. The step-through bike is powered by a 500W continuous and 750W Bafang hub motor in the rear and can reach top speeds of 28 miles per hour in the U.S.  The BQi, priced at $1,499, will also be app-connected and feature many smart security features.

Okai, another Chinese manufacturer that supplies vehicles to many big-name shared operators, came to CES with five products, including a smart helmet and a smart backpack.

Segway, the electric micromobility manufacturer that not only sells personal vehicles but also supplies a number of the world’s shared operators with vehicles, came to CES with a new kick scooter line, the P-Series, and a new moped-type e-scooter, the E11a. 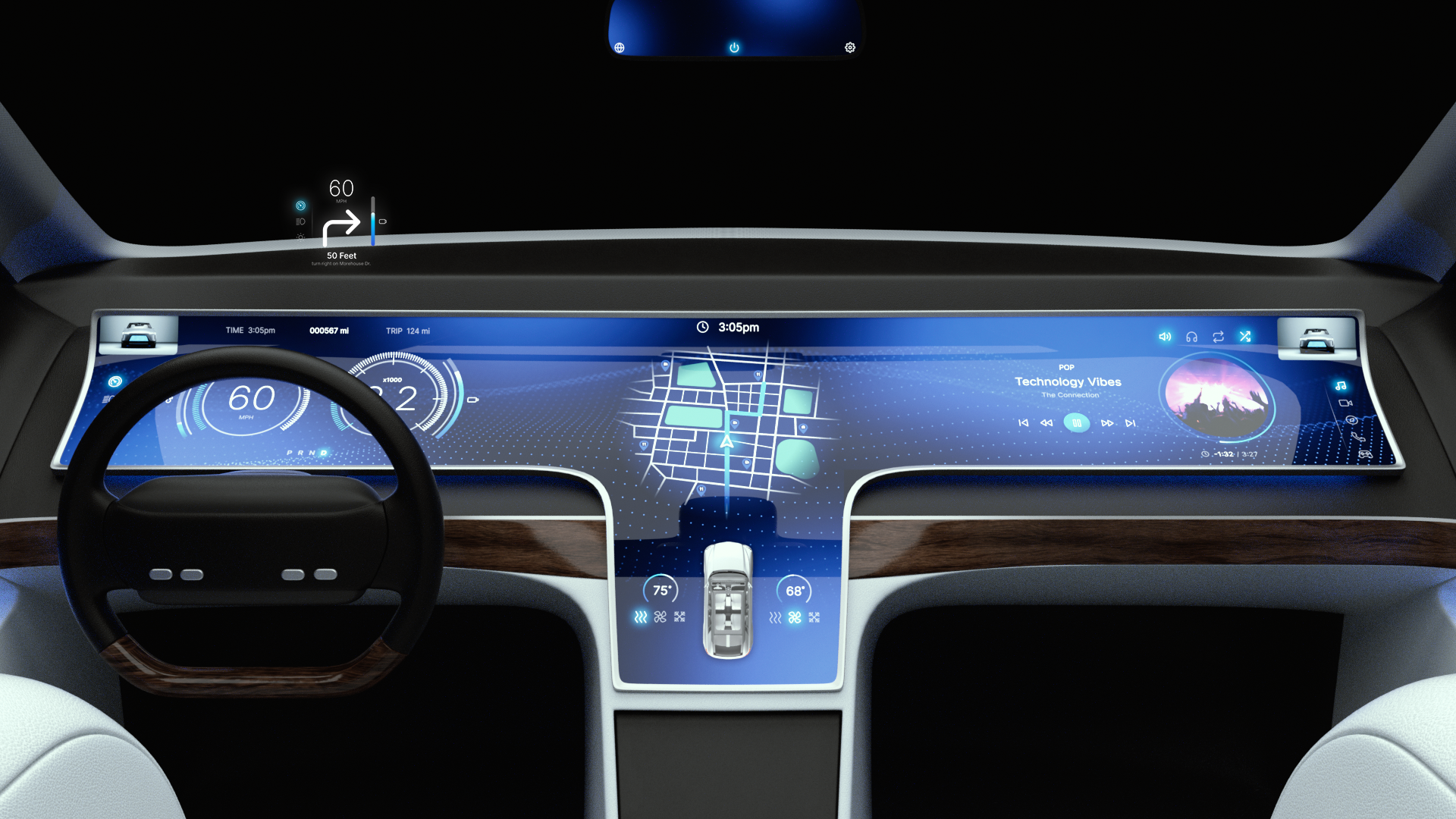 There was a lot of “vehicle tech” this year. I will provide a roundup below, but first some themes.

CES 2022 was not a showcase of autonomous vehicle technology — at least not compared to years past. I base this “observation” on feedback from industry experts who were on the ground as well as examining what companies attended and their announcements.

It wasn’t absent, mind you. But it was overshadowed by a lot of advanced driver assistance system technology, services and experiences that drivers and passengers can have inside vehicles and the compute power needed to deliver it all. When automated driving did pop up, it often came in the form of future promises, narrowly defined autonomous features like parking — or both.

We have a nice long 3,000 word article on all the weird and cool vehicle tech we took note at CES 2022. Here are a few of those items.

The automotive chip game was on

Intel, Nvidia and Qualcomm all showed up in force. There were two areas where “compute” was talked about the most. The first was to provide the power to deliver digital services and content like Qualcomm’s Spandragon Digital Chassis. The other area that compute showed up was in support of automated driving features and advanced driver assistance systems. Intel, Nvidia and Qualcomm also made announcements, including Intel subsidiary Mobileye announcing plans to bring a new supercomputer to market designed to give passenger cars, trucks and SUVs autonomous driving powers.

Another big theme was connectivity. Sure, sure, that’s old news, right? This year it wasn’t just talking about what might come from an internet connected vehicle with the right underlying operating system and processing power; companies also showcased the products and services that will be in cars imminently.

Amazon, Blackberry, Cerence, Google, Stellantis and Volvo were some of the companies that introduced new connected features or systems. Amazon kicked off its effort in the fourth quarter last year when it announced Stellantis would became the first automaker to integrate Fire TV for in-car entertainment with its new Wagoneer and Grand Wagoneer. At CES, Amazon said it will bring the entertainment experiences to Jeep Grand Cherokee and Chrysler Pacifica, as well. In addition, Fire TV will come built-in on Ford Explorer and Lincoln Navigator’s 2022 models.

Google and Volvo talked about how car owners would be able to download YouTube into the vehicle’s infotainment system via the Google Play Store and Cerence and Blackberry made announcements about their “digital co-pilots.”

I won’t get too deep into the weeds because you’d be here all day, but companies like GM, Volvo, TuSimple and Gentex made announcements about autonomous driving and ADAS.

Oh and how can I forget, Mobileye is partnering with Chinese automaker Zeekr to develop an all-electric autonomous vehicle for consumers. The vehicle will be sold in China starting in 2024 and eventually roll out to other markets.

You probably saw BMW showed off a color-changing car. But did you hear that Vietnamese automaker Vinfast will issue the first customers to pre-order a vehicle a “VinFirst” certificate on the blockchain platform in NFT form, which the company says is a completely transparent way to prove ownership of an order number?

NFTs and the term digital twins popped up a few times in the automotive sector at CES 2022, including an announcement from Cerence and Vinfast.

The gist is this: Cerence has cloud-based software that allows Vinfast (or any other company intrigued by the product) to create a virtual representation of its entire car, including software, mechanics, electrics and physical behavior, along with driver data and environmental data.

CES has been used as a platform for automakers to launch new electric vehicles since at least the middle of the last decade. And this year was no different, although maybe even more than in the past. Even Sony came back with its Vision S concept electric car, and announced that the Sony Group is starting a new division — the Sony Mobility Inc — which will start commercializing its electric vehicles.

General Motors CEO and Chair Mary Barra, who introduced the  Chevy Bolt EV on the CES stage back in 2016, came back virtually again with a bevy of announcements related to its electric vehicle plans.

First up was the reveal of the Chevy Silverado EV. GM introduced two trims, a basic work truck called at WT that has a range of 400 miles, up to 664 horsepower and a starting price of $39,900. Then there is the RST First Edition, a fully loaded, four-wheel steering truck that will start at $105,000.

The Chevy Silverado has long been the main competitor with the top-selling Ford F-150 pickup. Side note: Last week Ford said it was doubling production capacity of the new all-electric F-150 Lightning.

Barra also confirmed — and showed pictures of — an electric Chevy Equinox as well as a Chevy Blazer that will both come in 2023.

What might have been missed during the splashy event (there were a number of announcements) was an image of a pontoon boat that flashed behind Barra as she spoke. 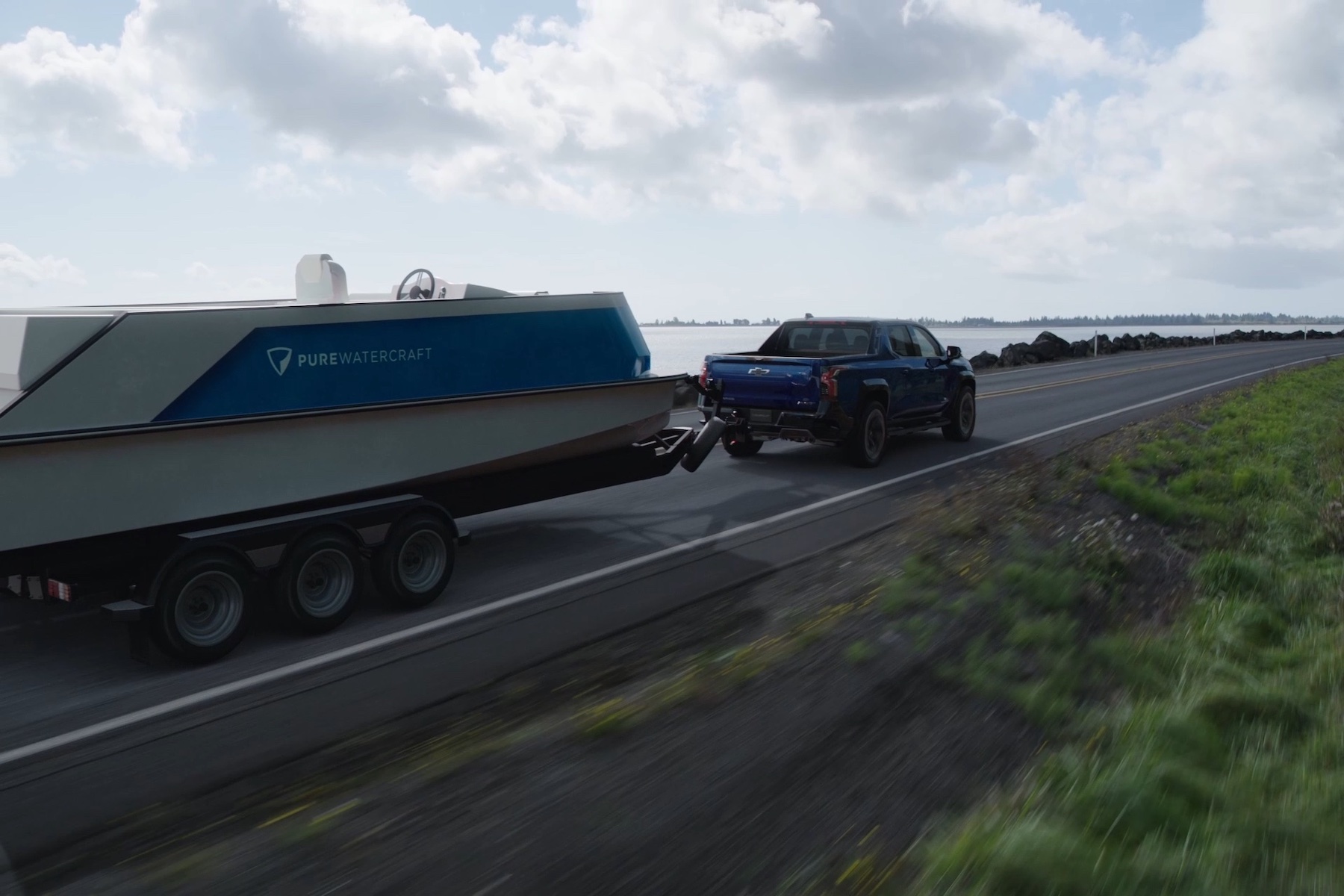 I got confirmation from GM that this is the newest boat from Pure Watercraft, which separately revealed the new product at CES 2022 and opened up pre-orders. If you recall, the automaker took a 25% stake in the Seattle-based electric boat company last November.

This is the first product to come from GM’s investment in Pure Watercraft. The boat uses GM EV components. What makes this so interesting, beyond the EV boat, is that this illustrates GM’s broader push into EV component strategy, which the company thinks has an addressable market of $20B by 2030. This includes marine applications, along with EV crate motors for historic vehicles and converting equipment like airport ground support vehicles to electric propulsion.

I chatted with Travis Hester, GM’s VP of EV growth operations so stay tuned this coming week for insights on this strategy.

Other major automakers that showed off electric vehicle concepts included Stellantis with its Airflow concept and Mercedes-Benz with the EQXX.

Stellantis actually had a bunch of news, including that it will turn Chrysler into an all-electric brand. The big overall announcement was the tip-to-tail agreement Stellantis now has with Amazon that covers a cloud computing contract, software development and supplying the e-commerce company with its upcoming all-electric Ram Promaster vans.

I interviewed Stellantis CEO Carlos Tavares and am saving the good stuff for this coming week.

And then there is Mercedes-Benz and its EQXX concept. This isn’t meant to be your typical we”ll-never-see-this-again concept car.

The EQXX is meant to showcase what the automaker’s electric future will look like and includes a ton of tech and features, which Markus Schäfer, a board member of Daimler AG and CTO of Mercedes-Benz AG, told me will show up in vehicles beginning in 2024.

There were lots of smaller players as well that I want to briefly mention.

ElectraMeccanica showed off a few of its single occupant EVs, including the SOLO “O2” Oxygen, which has a redesigned dashboard and the SOLO Cargo, a modified version of the flagship vehicle, designed to accommodate a wide range of commercial applications.

Then there was Triggo, a fun-looking single occupant electric vehicle that can actually get slimmer if needed. 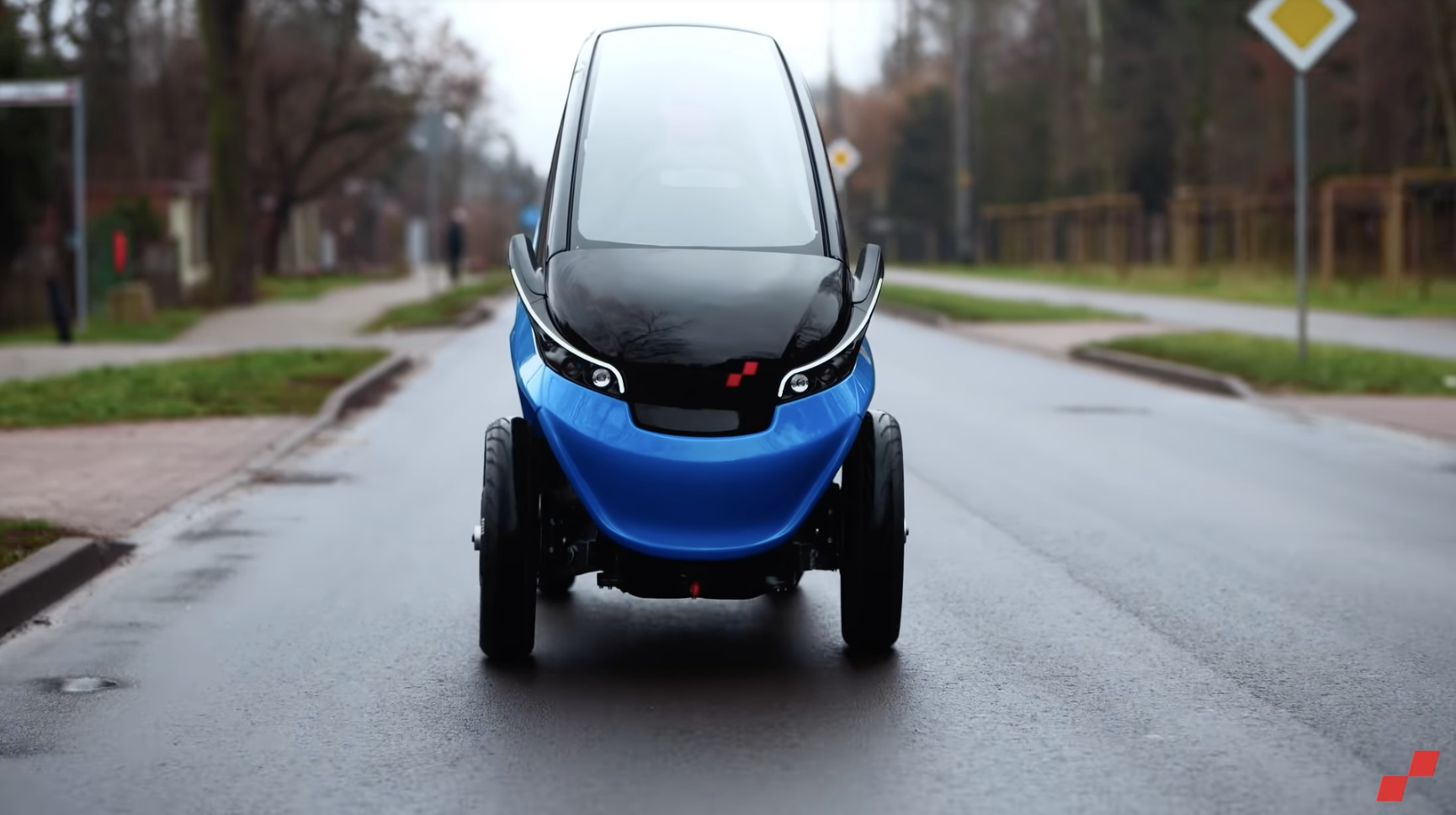 OK folks, that’s it. Thanks for hanging in there for the CES information dump. This coming week I plan to feature interviews with Stellantis’ Tavares, GM’s Hester and Toyota chief scientist Dr. Gill Pratt.