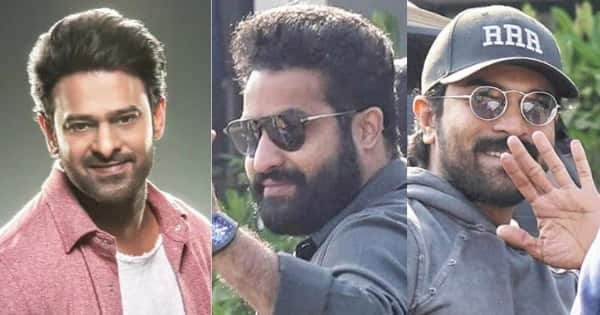 Thalapathy Vijay to begin shooting for his next soon, Pooja Hegde opens up on mixed reactions on Radhe Shyam, KGF Chapter 2, Ram Charan, Jr NTR, SS Rajamouli head to Dubai for RRR promotions, Samantha Ruth Prabhu‘s post and Vishal’s special gesture on Puneeth Rajkumar‘s birth anniversary and more. Let’s meet South Newsmakers of the day. A new update on Thalapathy Vijay’s next has surfaced. RC, Taarak and Rajamouli were snapped at the airport heading to Dubai for RRR promotions. A new song update from Yash starrer KGF 2 was shared and more. So, y’all see a lot happened in the South News… Also Read – Thalapathy 66: Vijay and Rashmika Mandanna to start shooting for the Vamshi Paidipally film from THIS date

Samantha Ruth Prabhu who is working on Yashoda took to her Instagram stories to share a picture. She was giving her fans a glimpse of her Friday energy. The actress seems too tired and was seen resting on a sofa, surrounded by her pooches Hash and Saasha. Check out the picture here. Also Read – Samantha Ruth Prabhu’s ‘Friday Energy’ is perfect for the long weekend – view pic

Thalapathy Vijay’s next Thalapathy66 is one of the most anticipated films which the actor has in the pipeline. Reports have surfaced that before Thalapathy and Pooja Hegde’s Beast hit the theatres, the actor will begin shooting for his next. It is said that Rashmika Mandanna is paired opposite Vijay in the film which also stars Prakash Raj. The film is said to go on floors in the first week of April. The film marks the first collaboration between Dil Raju, Vamsi Paidipally and Thalapathy Vijay. Also Read – RRR: Ram Charan gets plastered all across Times Square, New York; fans go bonkers – watch video

A report in Gulte.com revealed the budget and runtime of the RRR movie. As per the report, RRR is 3 hours 9 minutes and 42 seconds long. Another report said that RRR has been made on a budget of Rs 336 crores, said Gulte.com. A couple of hours ago, SS Rajamouli, Ram Charan, Jr NTR and Karthikeya were snapped at the airport today. All of them were snapped in black heading to Dubai. Ram Charan had his pet pooch in his hand whereas Jr NTR was seen greeting the paps with a thumbs up and a hi. Check out the pictures and videos below:

A report claimed that Prabhas had jetted off to Spain on 10th March, just before the release of Radhe Shyam. It was said that the actor wanted to chill out with his friends and took a vacation. However, the latest report state that Prabhas has undergone surgery in Spain. It is said that he underwent surgery in Barcelona’s super speciality clinic.

Yash starrer KGF Chapter 2 is all set to release on 14 April. Recently the makers announced that the lyrical video of song named Toofan will be dropping on 21st March at 11:07 AM. KGF 2 also stars Malavika Avinash, Rao Ramesh and others in the supporting roles. Prashanth Neel has directed the film as well as its first part.

Get Ready! #Toofan is coming ?

Pooja Hegde and Prabhas’ Radhe Shyam was released on 11th March 2022. The film opened to mixed reviews. Recently Pooja opened up on the same. The actress said that every film has its own destiny. “Sometimes you watch a film and you’re ‘oh, it’s just an okay film’, but the box-office does really well. And there are few movies that didn’t do well at the box-office, but after watching it, you are like, ‘wow, I cannot understand why this movie did not run well. It’s quite good.’ So I feel every film has its destiny at the box-office,” she said, reports Gulte.com.

It was Kannada superstar Puneeth Rajkumar’s birth anniversary yesterday. He was one of the most respected actors of the industry. Puneeth’s last film James was released posthumously. Actor Vishal paid a tribute to the actor by feeding more than 200 elderlies.

That’s all in the South news today.