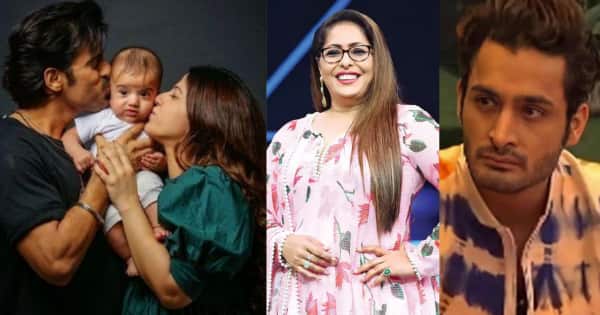 In a harrowing detailed post, Kishwer Merchant revealed that a couple of days ago, Nirvair Rai caught COVID. The actress thanked Suyyash Rai for being the doting husband, father and man in the house. She praised him for taking care of everything while even their house help had tested positive. The Pyaar Kii Yeh Ek Kahaani actress revealed that the two of them have been managing everything and lauded Suyyash for being a big help in the tough times. Also Read – Bigg Boss 15: Umar Riaz hits back at Geeta Kapur for demeaning him and his profession on National television

Another toddler to get affected by COVID is Mohit Malik and Aditi Shirwaikar son Ekbir Malik. Aditi revealed in her post that one-morning Ekbir woke up with a slight temperature. Her worst fears were realised when he was tested positive. Aditi revealed that she and Mohit decided to keep the atmosphere at home positive and happy, so that, Ekbir would sail through smoothly. She also revealed that Ekbir caught the bout of flu this year whereas Mohit had caught flu same time, last year

Rajiv Adatia, who was a part of Bigg Boss 15, went live on Instagram and lashed out at Tejasswi Prakash for gaining sympathy and playing victim card while her boyfriend Karan Kundrra always faced the heat in the Weekend Ka Vaar. Rajiv calls Karan the sweetest guy and was very upset when due to Teja Karan had to face the heat from Salman Khan.

Umar lashes out at Geeta Kapur

In the latest Weekend Ka Vaar episode, Umar Riaz faced a lot of flak from Salman and from the guests who had come on the show. One of them was Geeta Kapur. She talked about his medical profession and said that aggression is his inherited nature. After leaving the house, Umar Riaz took to his Twitter handle to clear Geeta’s doubts and accused her of creating false narratives.

Check out his tweet here: Bigg Boss 15: Umar Riaz hits back at Geeta Kapur for demeaning him and his profession on National television

Late last night after Weekend Ka Vaar, Rajiv Adatia had come live on Instagram. Himanshi Khurana later joined him. They both talked about how unfair Umar’s eviction had been. Rajiv was very upset with the fact that Umar was shown the door. He kept saying that Umar would take care of everyone inside the house. He gave his heart and soul to the game, Rajiv said.

Abhimanyu aka Harshad Chopda is very angry with Akshara aka Pranali Rathod. The current track talks about Abhimanyu resenting Akshara because she asks him to move on from her and think about his wedding with Aarohi instead. Abhimanyu thought that Akshara will stop the wedding, however, she is all up for moving on plan. Hence, Abhimanyu has turned a little harsh in his resentment. It seems his character was getting a lot of flak. Some have come out in support of Abhimanyu aka Harshad.

Check out the reactions here: Yeh Rishta Kya Kehlata Hai Twist: Fans come out in support of Harshad Chopra aka Abhimanyu after he harshly slams Pranali Rathod aka Akshara

It was Drashti Dhami’s birthday today and the actress received plenty of wishes from her, colleagues and well-wishers. One of them was Nakuul Mehta. Nakuul shared a before-after picture on his gram to wish Drashti. The throwback picture of Nakuul and Drashti Dhami received a lot of attention. Fans felt they looked quite cute together.

That’s all in the TV section for the day.