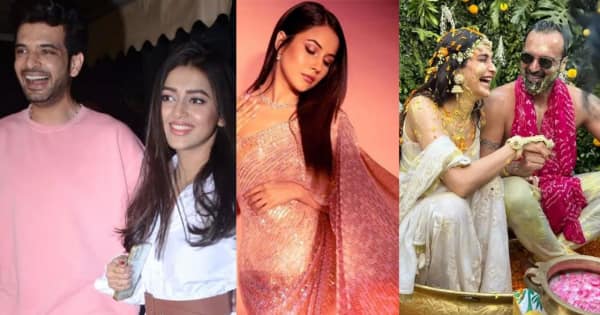 Nakuul Mehta, Disha Parmar starrer TV show, Bade Achhe Lagte Hain 2 enjoys decent popularity online. Recently, fans saw Priya saving Ram from Mahendra Sood’s evil plans and getting injured herself in an accident. Though the show enjoys a good online fanbase, recently, some fans had called out the dialogues and lack of logic in the scenes. Elsewhere, RaYa fans were super excited to watch Ram aka Nakul Mehta’s heart-wrenching performance in the upcoming episode of Bade Achhe Lagte Hain 2. Check out their tweets here. Since we are talking about Nakuul Mehta, the actor’s son Sufi celebrated his 1st birthday today. Nakuul and Jankee had the cutest wish for Sufi. Also Read – Nakuul Mehta-Jankee Parekh’s son Sufi turns one: Bade Achhe Lagte Hain 2 star’s birthday wish for him will tug at your heartstrings – watch video

In the latest episode of Yeh Rishta Kya Kehlata Hai, we saw Pranali Rathod aka Akshara blowing flying kisses to Abhi aka Harshad Chopda. Akshu’s little boldness had left Abhi blushing. Fans yet again couldn’t stop crushing over Abhi, that is, handsome hunk Harshad Chopda. AbhiRa also spiked up the TRPs which added to their happiness.

Ever since Tejasswi Prakash won Bigg Boss 15, she had been grabbing headlines. She is also a part of Naagin 6. Recently, Tejasswi reacted to the wedding rumours with Karan Kundrra. The March wedding thing had gone viral on social media like crazy. And hence, the wedding question has always been there. However, now that the duo is out, they are taking things slow. Tejasswi Prakash opened up on the wedding rumours. Check out the report here. Since we are talking about Tejasswi, it is said that Naagin 6 is one of the most expensive TV shows. Here are 7 more EXPENSIVE TV shows. Fans of Tejasswi Prakash had been trending TEJASSWI GRACING NAAGIN as they are eagerly waiting to watch their favourite actress in the supernatural thriller series.

Yesterday evening, Devoleena Bhattacharjee and Vishal Singh dropped a couple of pictures announcing ‘It’s official’ on Instagram. Everyone misunderstood that they have been dating and that they are confirming their relationship. They later revealed that it was a prank and it was a music video announcement and nothing more. Fans were pretty enraged at being fooled by Devoleena and Vishal.

Bigg Boss 15’s Karan Kundrra recently opened up on Shehnaaz Gill’s emotional tribute for late actor Sidharth Shukla. The actress had graced Bigg Boss 15 finale. It was very emotional wherein both Salman Khan and Shehnaaz shed tears. Karan revealed in an interview that he and the rest of the housemates were worried about how she was coping with the loss. Karan praised that she was back in her element. Read the whole report here.

Bharti Singh and Haarsh Limbachiyaa are expecting their first child together. Bharti is working throughout her pregnancy while taking utmost precautions. Haarsh is with her all the time. However, recently, Bharti had an incident in which Bharti almost slipped and fell. Haarsh was scared a lot and he scolded Bharti for being careless. Check out Bharti and Haarsh’s video here.