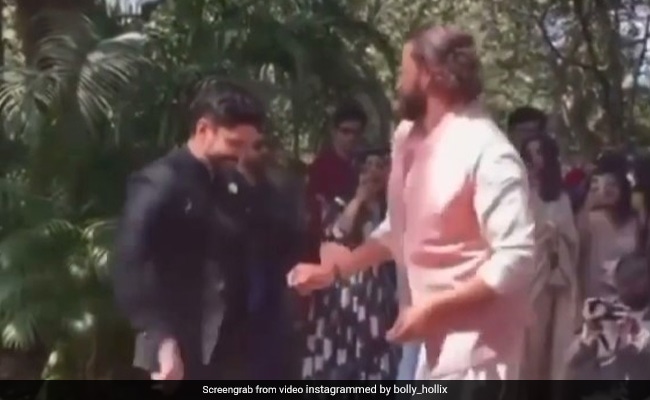 Farhan and Hrithik in a still from the video. (courtesy: bolly_hollix)

At  Farhan Akhtar and Shibani Dandekar’s wedding, the groom and his best friend Hrithik Roshan danced to Zindagi Na Milegi Dobara song Senorita and the video is going insanely viral. In the video, which is being widely circulated on social media, Hrithik and Farhan can be seen doing the hook step of their song Senorita. In a section of the video, Hrithik forgets the hook step. However, he does catch up with more than a little help from Farhan. Hrithik Roshan attended Farhan and Shibani’s wedding with his father Rakesh Roshan and mother Pinkie Roshan.

Check out the video here:

Hrithik Roshan and Farhan Akhtar are childhood friends, who have worked together in films like Luck By Chance and Zindagi Na Milegi Dobara. Farhan also directed Hrithik Roshan in the film Lakshya.

Earlier, a video of the newlywed couple dancing at the their wedding ceremony went viral. This is the video we are talking about:

Shibani Dandekar and Farhan Akhtar started dating in 2018 and they got married in an intimate ceremony in Khandala on Saturday. The actor was earlier married to celebrity hairstylist Adhuna Bhabani, with whom he has two daughters – Shakya and Akira. Farhan Akhtar’s last project was Toofan, which was directed by Rakeysh Omprakash Mehra. The actor will also direct a film called Jee Le Zaraa, starring Priyanka Chopra, Alia Bhatt and Katrina Kaif.

Farhan Akhtar, who stepped into Bollywood as a filmmaker, is best-known for directing movies like Dil Chahta Hai, the Don series, starring Shah Rukh Khan and Lakshya. He made his acting debut with Rock On!!. He is best-known for his performances in films like Bhaag Milkha Bhaag, Zindagi Na Milegi Dobara, Dil Dhadakne Do and The Sky Is Pink.

Shibani Dandekar, a popular name in the Indian television industry, became a household name after she started hosting Indian Premiere League. She has participated in reality shows such as Khatron Ke Khiladi and Jhalak Dikhla Jaa. Shibani was also seen in the second season of Amazon Prime Video’s web-series Four More Shots Please! .