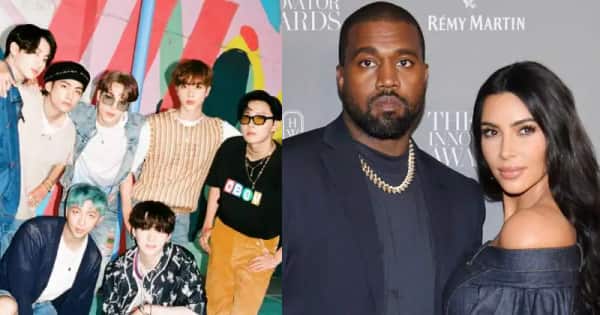 We are back with your daily dose of Trending Hollywood news. Among the top newsmakers of the day, we have celebrities like K-pop boy band BTS, Kanye West-Kim Kardashian, Pete Davidson, Britney Spears and more. BTS fans are over the moon as the septet has announced their live concernt in Seoul. Kanye West and Kim Kardashian’s family drama is keeping everyone hooked. Kim’s relationship with Pete Davidson is also grabbing eyeballs. To get the latest dope, scroll on! Also Read – After Disha Patani, Blackpink singer Jennie Kim’s pics in Calvin Klein lingerie break the Internet [VIEW PICS]

BTS announces its next concert
Korean boy band BTS left ARMY overjoyed by announcing their next concert. Permission To Dance on Stage concert is next going to happen in Seoul. The concert is going to take place at Seoul Olympic Stadium on for three days on 10th, 12th and 13th March before a live audience. It will be telecasted live on several platforms simulteneously. Also Read – BTS: Jungkook becomes the first Asian Artist to achieve THIS glorious feat with his song Stay Alive produced by Suga

Kanye West talks about ‘harassing’ ex-wife Kim Kardashian
In a recent Instagram post, Kanye West opened up about the screenshots of chats with Pete Davidson that he shared online. He stated that it was jarring and was considered as harassment to Kim Kardashian and took accountibity of it. He wrote, “I’ve learned that using all caps makes people feel like I’m screaming at them. I’m working on my communication. I can benefit from a team of creative professionals, organizers, mobilizers and community leaders. Thank everybody for supporting me. I know sharing screen shots was jarring and came off as harassing Kim. I take accountability. I’m still learning in real time. I don’t have all the answers. To be good leader is to be a good listener.” Also Read – BTS Permission to Dance on Stage Seoul concert: K-pop band announces first live gig in over 2 years – view dates, timing and more

Star Trek 4 in the making
It has now been confirmed by the makers that Star Trek 4 is on the cards. Talking to Variety, producer JJ Abrams said, “We are thrilled to say that we are hard at work on a new Star Trek film that will be shooting by the end of the year.” The original cast of Chris Pine, Zachary Quinto, Zoe Saldana, John Cho, Karl Urban and Simon Pegg is expected to return.
Alec Baldwin sued by the family of cinematographer who died on the sets of Rust
A few months ago, a cinematographer died on the sets of Alec Baldwin’s film Rust after a bullet was accidentally fired from a prop gun. Now, reports suggests that the family of the deceased is suing the actor. A lawsuit has been filed against the actor accusing him of wrongful death in New Mexico on behalf of Halyna’s husband Matthew, as reported by Hollywoodlife.com.

Britney Spears welcomes new member to family
Toxic singer Britney Spears has all the reasons to be happy as she has welcomed a furry friend into her life. She has adopted a dog, an Australian Shepherd with blue eyes. She took to her Instagram account to introduce her fans to her new love.