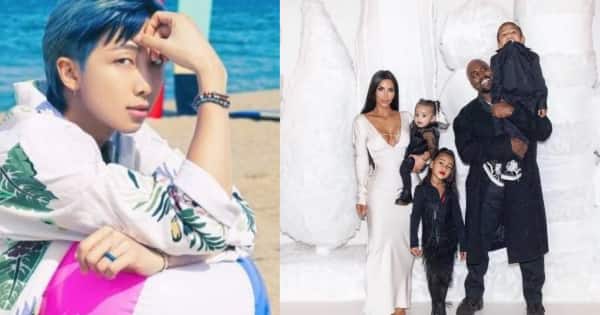 K-pop boy band BTS’s leader Kim Namjoon aka RM made it to the headlines today as he gave fans a peek into his studio by sharing pictures. Kanye West has left everyone shocked again as he made a surprising post on Instagram regarding Kim Kardashian and kids. On the other hand, Pete Davidson has revealed his Valentine’s day plans with new girlfriend Kim Kardashian. Pregnant Rihanna has stunned all once again by flaunting her bare baby bump. To get more information on the top Hollywood stories, scroll on. Also Read – BTS: Kim Taehyung aka V leaves RM embarrassed with his comment on ‘nose hair’; what happens next will leave you in splits – watch

Now that BTS members are on Instagram, they are entertaining fans aka ARMY by giving a peek into their daily lives. Group member RM shared some unseen pictures of his studio and fans are comparing it to an artistic museum. Also Read – BTS leader RM aka Kim Namjoon shares UNSEEN pics of his studio; ARMY calls it a ‘walkthrough museum’ [PICS]

Every step toward his studio is like walking through a museum and I love how he shared that with us….♡ #Rkive #Namjoon pic.twitter.com/xFOEaOsN0y

Kanye West wants Kim Kardashian and kids back in his life

While talking to Kay Adams on the People (The TV Show!), Pete Davidson revealed his special Valentine’s Day plans with his ‘girlfriend’ Kim Kardashian. He was quoted saying, “I don’t think I’ve ever had a Valentine’s Day thing, really. So this would be the first year that I’m thinking about Valentine’s Day plans, I guess.” He further added “It’s a big day.”

It was recently that Rihanna and Rocky A$AP announced that they are going to be parents soon! In the recent pictures, Rihanna once again flaunted her bare baby bump. RiRi fans are going gaga over these pictures.

On The Ellen Show, Jennifer Lopez spoke about how it was getting back together with Ben Affeck after 18 years. She stated that they were more surprised than anybody else. “I don’t think anybody was more surprised than us” the actress said and added, “You never could imagine something like that could happen. It’s a beautiful thing.”