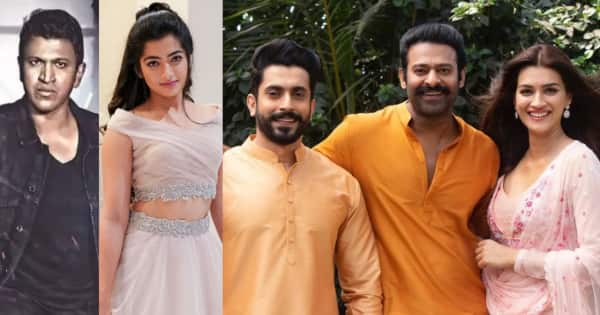 Rashmika Mandanna is currently basking in the success of Pushpa. The actress has a couple of films in her kitty already that are awaiting their releases. Be it Aadavaallu Meeku Johaarlu with Sharwanand or her Bollywood debut film with Sidharth Malhotra which is Mission Majnu. Or even her another Bollywood film, Goodbye with Amitabh Bachchan. The shooting of the films has been wrapped up. And now, a report in Telugu360.com states that Rashmika Mandanna is eyeing another Hindi movie. It is being said that Rashamika is in talks with Dharma Productions for a women-centric film.

Samantha Ruth Prabhu and Allu Arjun starrer Oo Antava is huge rage across the country. Reels are being made of the song, left-right and centre. The singer Indravathi Chauhan has become a household name with her amazing vocals for Oo Antava. And now, Sophie Choudry has given a shot at the song too. Sophie shared a video of herself crooning to the song and it instantly went viral. Allu Arjun’s brother Allu Sirish also dropped a comment on her video. Check out the video here.

Shruti’s heartfelt note for her fans

It’s Shruti Haasan’s birthday today and the actress thanked her fans for pouring so much love for her and for making her birthday so special. The actress said that she was grateful to the fans for taking so much effort in making her feel special when her birthday hadn’t even begun. The actress said that she has learned one thing this year which is she doesn’t know enough and that she keeps learning a lot of things from a lot of people. Check out Shruti Haasan’s post here. Also, the makers of Salaar revealed Shruti Haasan’s character’s name from her and Prabhas’ film. Shruti plays Aadya in the action-thriller directed by Prashanth Neel. Her first look was also unveiled by the makers on her special day today.

Srivalli lyricist opens up on Bollywood

Pushpa’s song Srivalli is another track that has become a huge hit amongst the masses. Reels are being made on the song with the iconic Allu Arjun’s hook step. BollywoodLife recently interacted with the lyricist of Srivalli, Raqueeb Alam who revealed why he finds it difficult to work in Bollywood. It’s an eye-opener, tbh. Raqueeb opened up on having groups and diktats on lyrics by the producers and more. Check out Srivalli lyricist’s interview here.

Prabhas, Kriti Sanon and Sunny Singh starrer Adipurush is one of the most anticipated films of the year. A report in Tollwyood.net said that Adipurush will have a global release in about 15 languages. It also includes domestic and international languages. And that’s not it, the Prabhas and Kriti Sanon starrer will also release on 20,000 screens worldwide. The film also stars Sai Ali Khan. Adipurush is scheduled for an August release.

That’s about it in the South Newsmakers for the day.