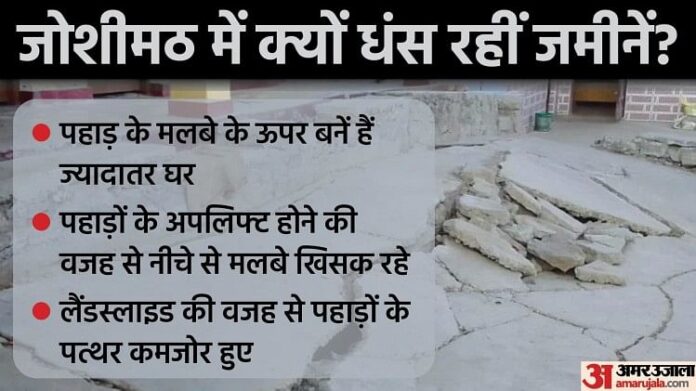 A big claim has come to the fore regarding the sunken land in Joshimath, Uttarakhand. A few days before this incident, the research team of IIT Kanpur had reached the same place. Geologist Prof. to this team. It was directed by Rajeev Sinha. The team had conducted an important survey during this period. Pro. Rajeev clearly said that at the moment talking about rehabilitating Joshimath is not empty of danger. Right now it is not worth living at all. Let us know what the team of scientists saw during the survey? After all, why did the land sink in Joshimath? Pro. Why is Rajeev saying that now Joshimath is not a suitable place for people to live?


First know what happened in Joshimath?

After these incidents, the administration also swung into action and a joint team was formed by the Chamoli district administration. The team surveyed the houses affected by landslides in the city for two days. The joint team of Tehsil Administration, Municipality, Disaster Management and SDRF went door-to-door and inspected closely. There are about two thousand houses in Joshimath town. Till Sunday, cracks had appeared in more than 600 houses due to the landslide.

The series of landslides came to the fore on Monday night when suddenly huge cracks appeared in many houses. After this, fear spread in the whole city. Cracks appeared in several houses of Jaypee Company’s residential colony located in Marwari ward. Suddenly brown water started leaking from the hill behind the colony at night itself. A buttress of the colony also collapsed due to the crack. Along with this, thick cracks also appeared on the Badrinath Highway. At the same time, slight cracks were also seen in the residential buildings of the tehsil. Landslide caused cracks in Jyoteshwar temple and temple premises.

The multi-storey hotel Mount View and Malari Inn in Singhdhar ward were obliterated due to land subsidence. According to the local people, around 10 pm on Monday night, the sound of cracking started coming from the walls of the hotel, due to which the people of five families living behind these hotels came in panic.