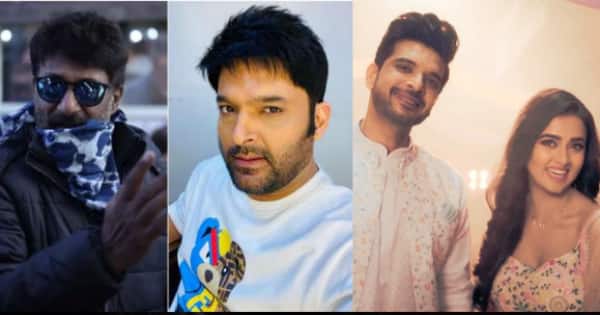 Tha Kapil Sharma Show, The Kashmir Files, Tejasswi Prakash and Karan Kundrra, Shivangi Joshi, Imlie, Shehnaaz Gill, Shamita Shetty and Raqesh Bapat, Bade Achhe Lagte Hain 2, Anupamaa, Yeh Rishta Kya Kehlata Hai, and more made news in the TV section this past week. The Kapil Sharma Show got embroiled in a controversy over the promotion of The Kashmir Files, Lovebirds Tejasswi Prakash and Karan Kundrra grabbed headlines for a lot of reasons. Shivani Joshi talked about her bond with Mohsin Khan and opened up on pay disparity on Indian television. Shehnaaz Gill’s video from Dabboo Ratnani’s photoshoot went viral. Shamita Shetty and Raqesh Bapat debunked the break-up rumours by walking down the red carpet event of the awards show together and more. So, you see, a lot happened in the TV world… here we are with a recap… Also Read – 10 BollywoodLife Exclusives of the week: Shamita Shetty-Raqesh Bapat on their relationship, The Kashmir Files actor Darshan Kummaar slipping into depression and more

The Kashmir Files vs The Kapil Sharma Show

This past week, The Kashmir Sharma Show got embroiled in controversy yet again. After Vivek Agnihotri shared that he and his team of The Kashmir Files weren’t invited to promote their film on the show. A boycott was called on The Kapil Sharma Show on Twitter. When Kapil was asked about the same, he had replied to a fan asking him to not believe in a one-sided story. Later, on a new channel, Anupam Kher was asked about not promoting The Kashmir Files on Kapil’s show. The veteran actor revealed that he was invited to the show but the context of the film is such that going on a comedy TV show didn’t feel right. Kapil had shared the clip and thanked Kher for the same. The actor later said that Kapil should also have given the whole truth. Darshan Kumaar who plays a key role in the film said that it would have been better if they could have got a chance to promote their film on The Kapil Sharma Show. Also Read – Trending Entertainment News Today: Sanjay Dutt meets Pervez Musharraf in Dubai; The Kashmir Files inches closer to Rs 100 crore mark and more

A couple of days ago, Navjot Singh Sidhu lost the election in Punjab. And thereafter, memes started off on Archana Puran Singh. The actress who is a part of The Kapil Sharma Show was not related to Sidhu’s elections in any way. However, trolls made memes on her depicting that Archana’s job is in a fix. Archana later slammed the trolls saying that she felt surprised to see that Navjot was still be associated with the show where she never have been a part of politics. Archana also expressed her surprise that people believe apart from The Kapil Sharma Show, she doesn’t have any work. She busted the myth about the same. BollywoodLife.com had reached out to Archana on the buzz of quitting the show. However, Archana rebuffed them saying that they were baseless. BollywoodLife.com also ran a poll on Twitter asking would they want Navjot to replace Archana again. And guess who got votes? The audience voted for Archana is perfect. Also Read – Naagin 6 actress Tejasswi Prakash gets a kiss from beau Karan Kundrra at Ankita Lokhande and Vicky Jain’s Holi bash; here’s what paps called them – watch video

Last week, there were reports that Shamita Shetty and Raqesh Bapat have broken up. The duo had slammed the reports and denied having broken up. Later, Shamita and Raqesh walked hand-in-hand at the red carpet of the awards show in the city, further, debunking the reports. A well-placed source in the industry informed BollywoodLife that the two have been facing some issues but were working on them. The source informed BL that Shamita and Raqesh are both in love and want to iron out their differences. The source also informed that Shamita’s mom, Sunanda Shetty, has been playing the cupid between the two and helping them sort out their issues.

Tejasswi Prakash and Karan Kundrra made news for various reasons, be it their spotting, their quotes from interviews about each other and more. In an interview, Karan Kundrra revealed that Tejasswi Prakash wanted to have 25 kids. It could be a joke as they both are adorable goofballs in real life. Tejasswi and Karan’s cutesy bond is seen whenever they are spotted by the paparazzi together. The way Karan takes care of Tejasswi has been winning the hearts of TejRan fans. Both Tejasswi and Karan made it to the list of Forbes as their fans turned them into brands altogether. The duo also celebrated their first Holi together.

Shark Tank India’s judge Vineeta Singh did a spoof on a scene from 3 Idiots after her meme went viral featuring a snapshot of actress Amardeep Jha from 3 Idiots. The scene was when Aamir Khan, R Madhavan and Sharman Joshi visit Raju’s home for an earful after Virus sends letters home. Vineeta took the trolling sportingly and responded in a creative manner. It won the hearts of netizens.

Simba Nagpal and Tejasswi Prakash’s Naagin 6 has made it to the TOP 5. It has been placed 5th and has been tied with Kumkum Bhagya, Rupali Ganguly, Gaurav Khanna, Sudhanshu Pandey and Madalsa Sharma starrer Anupamaa continues to lead. Harshad Chopda and Pranali Rathod’s Yeh Rishta Kya Kehlata Hai has climbed the chart and has been placed 3rd alongside Yeh Hai Chahatein. Neil Bhatt, Ayesha Singh and Aishwarya Sharma starrer Ghum Hai Kisikey Pyaar Meiin have grabbed 2nd place on the TRP chart. Imlie has been placed 4th. Bade Achhe Lagte Hain 2 starring Nakuul Mehta and Disha Parmar got a rating of 0.6.

Balika Vadhu 2 actress Shivangi Joshi recently opened up on the pay disparity in the country. The actress said that she never encountered it in the TV industry. Shivangi said that the pay disparity may be in the film industry but she doesn’t believe it exists in the TV industry. Shivangi also opened up on her bond with Mohsin Khan. The Yeh Rishta Kya Kehlata Hai actress shared that nothing has changed between them and they continue to be friends.

That’s all in the TV news.