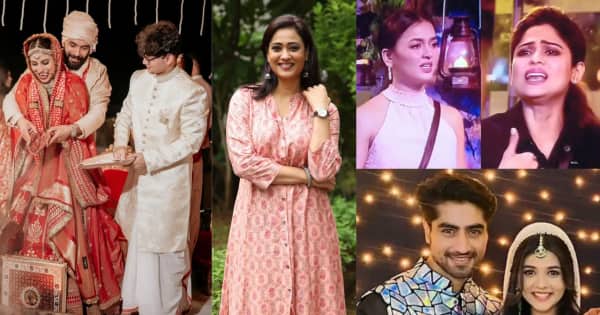 Mouni Roy, Shweta Tiwari, Shaheer Sheikh, Sidharth Shukla, Balika Vadhu, Yeh Rishta Kya Kehlata Hai, Anupamaa, Aditya Narayan, Bigg Boss 15 and more made news in the TV world this past week. It’s Saturday today, the day wherein we give a RECAP on all the TV Newsmakers of the week. This week we saw Mouni Roy getting married to Suraj Nambiar in Goa, Shweta Tiwari’s statement creates a controversy, Shehnaaz Gill’s fans celebrated her birthday, Sidharth Shukla’s family released a statement and a lot more. So, you see, a lot happened in the TV section. Let’s meet our TV Newsmakers of the week. Also Read – Bigg Boss 15: Karan Kundrra-Tejasswi Prakash, Pratik Sehajpal-Akasa Singh and more – contestants who raised brows with their romance – view pics

Brahmastra actress Mouni Roy tied the know with her Dubai-based businessman beau Suraj Nambiar. Mouni and Suraj had two kinds of wedding, a Malayalee wedding and a Bengali wedding. Mouni Roy wore a Sabyasachi outfit for her Bengali wedding while for her Malayalee wedding, Mouni wore a traditional white and red saree. Suraj complimented Mouni in beige at the weddings. The two lovebirds tied the knot at Hilton Hotel in Goa. All the pre-wedding functions such as Haldi and Mehendi happened in Goa too. Mouni’s BFFs – Arjun Bijlani, Mandira Bedi, Aashka Goradia, Anuradha Khurana and more had joined the Naagin actress for her special day and the pre-wedding festivities too. The pictures and videos from Mouni and Suraj’s haldi and Mehendi went viral on social media in no time. The actress’ happiness is gush worthy. Also Read – Naagin 6: Adaa Khan CONFIRMS her return in Ekta Kapoor’s supernatural thriller show; hints at premiere date – view pic

Shweta Tiwari courted controversy this week due to her remark at a press conference event. It so happened that the actress had been promoting her upcoming web series in Bhopal, Madhya Pradesh. The actress’s remark “Meri bra ki size Bhagwan le rahe hai,” did not go well with some netizens. They called her out and slammed her for her remark. However, the truth behind her statement was revealed later. Salil Acharya, who had been the host during the event, revealed that she had been taking in regards to her co-star Sourabh Raaj Jain. Sourabh is known for the mythological characters that he has played on screens to date. And in the series, Sourabh plays a bra fitter. And hence the remark. Later, a statement was also released by Shweta Tiwari’s team on her behalf that read, “It has come to my notice that a certain statement of mine referring to a colleague’s previous role has been taken out of context and has been misconstrued. When put in context, one will understand that the statement in reference to ‘Bhagwan’ was in context with Sourabh Raj Jain’s popular role of a deity. People associate character names to actors and hence, I used that as an example during my conversation with media. However, it has been completely misconstrued which is saddening to see. As someone who has been a staunch believer of ‘Bhagwan’ myself, there is no way that I would intentionally or unintentionally say or do any such thing that would hurt sentiments by and large. I have, however, come to understand that when taken out of context, it has unintentionally hurt the feelings of people. Please be assured that it has never been my intention to hurt anyone, with my words or actions. Hence, I would like to humbly apologise for the hurt that my statement has unintentionally caused a lot of people.” Also Read – Trending OTT News Today: Naga Chaitanya’s digital debut, Bobby Deol’s Love Hostel to premiere on ZEE5 and more

Late actor Sidharth Shukla’s family released a statement a couple of days ago asking people to seek their permission before using Sidharth’s name for their projects. “We, as a family, come with a request, which we hope everyone will respect. Sidharth has moved on and no longer can he make decisions for himself, but he’s still an integral part of our lives and our memories and we are there to protect his wishes. We request everyone who wants to use Sidharth’s name and/or face in any project, please reach out to us. Please take a moment to ask us. We knew Sidharth’s choices, we knew what he would have wanted and our decisions for him would be keeping all this in mind. And if there are projects that he wasn’t happy with, we are sure he wouldn’t want them released. Anything that did not release when he was with us, did not have his consent or intent for release. So please let’s keep his wishes in mind and let’s remember him with love, with respect, with fond memories, the ones he left us with…. From, The Shukla Family.” (sic) the statement read. It was then reported that Bigg Boss 15 contestant Vishal Kotian had been intending to release and unreleased song of Sidharth. It was an incomplete song and a report in Etimes claimed that Sidharth was not happy with the song and hence didn’t want it to be released. And since it was Sidharth’s wish himself, the family also don’t want it to be released.

It was Shehnaaz Gill’s birthday on 27th January. The Honsla Rakh actress’ fans celebrated her birthday online. They shared heartfelt messages for her on Twitter. Shehnaaz Gill reportedly had a lowkey birthday this time around. She shared some pictures of the gifts she received from the Brahmakumaris on her special day.

Last week, Shaheer Sheikh lost his father. The actor’s father had been hospitalised due to COVID and had been on a ventilator. It was said that his condition was critical. A couple of days later, Shaheer penned a heartfelt note in the memory of his deceased father. “There is greatness in patience, kindness and humility… There is happiness in giving to others… And there is peace in honesty… If there was ever a manual on the most incredible person, my dad was it. To lose him, to watch him go away has been the most painful phase of my life. He has left a void. In my heart. In my life. But before that, he has filled my life with meaning and purpose. He has filled it with so much love and compassion, that I don’t think there is any space for resentment. I’ve been blessed to watch the glorious life he lived, to witness the love he gave to one and all, to see the respect he had for everyone big or small. There is no goodbye here papa, because a part of you will always live on in me. Thank you for choosing me to be your son. There can be no bigger honor. #loveYouPapa,” the Kuch Rang Pyaar Ke Aise Bhi.

This whole week Bigg Boss 15 made news due to Tejasswi Prakash. Her ‘aunty’ remark for co-contestant Shamita Shetty did not go down well with a lot of people. Netizens felt Tejasswi age-shamed Shamita in front of the live audience. Shamita Shetty had been furious with Tejasswi for her remark. She also lashed out at Karan Kundrra for not taking a stand for her. Teja’s brother had come in her defence as everyone slammed his sister on social media. Gauahar Khan, Bipasha Basu, Kamya Punjabi, Devoleena Bhattacharjee, VJ Andy had slammed Tejasswi and come out in support of Shamita. The latter’s sister Shilpa Shetty had thanked everyone who supported Shamita in the matter. Tejasswi also grabbed headlines for another reason. It was previously reported by an online news portal that filmmaker Rohit Shetty had been rooting for Tejasswi’s win on the show. However, later, Rohit’s team had denied the whole report saying that the statement was false. Rohit’s team said that he had not been following Bigg Boss 15 and was busy shooting for his films.

This past week Harshad Chopda, Pranali Rathod and Karishma Sawant’s TV show, Yeh Rishta Kya Kehlata Hai made news for the episodes and new track. Firstly, Akshara aka Pranali confessed her true feelings to Abhimanyu. And she also shared her feelings in front of the families. There was a major drama as it all happened on the day of Abhimanyu and Aarohi’s wedding. Harshad Chopda and Pranali Rathod’s chemistry won hearts. The confession scene wherein Harshad was seen hanging upside down from the tree sparked off memes and the actor got labelled as ITV’s Spiderman. Fans couldn’t stop gushing over Harshad Chopda’s majnu avatar after Akshara’s love confession.

Rupali Ganguly, Gaurav Khanna, Sudhanshu Pandey, Madalsa Sharma and Aneri Vajani starrer Anupamaa made news for various things. Firstly, Gaurav and Rupali came live on Instagram which was a treat for all the MaAn fans. This past week, Anupamaa made news for the Makar Sankranti special episode. Madalsa aka Kavya returned in the episodes after going missing. Anuj and Anupamaa’s romance kept the audience entertained throughout the week. Gaurav’s loyal fan registered a real star in his name. The actor was touched by his fans’ gesture. Elsewhere, Sudhanshu Pandey opened up on all the hate he receives for his character. Sudhanshu added that he tries to not let all the hate for Vanraj get to him or affect his performance.

Gashmeer Mahajani left Imlie a couple of weeks ago. The actor played Aditya Tripathi opposite sumbul Touqeer’s Imlie and Mayuri Deshmukh’s Malini. The actor left the show to focus on his next project. It was stated that Gashmeer parted ways from the production house on a sour note. However, recently, in an interview, he rebuffed the claims and reports. He said that the reason he left the show is between him and the producer, Gul Khan. Elsewhere, Mayuri refused to open up on Gashmeer’s exit stating it was his individual decision as an artist. However, she heaped praises on her.

Aditya Narayan and Shweta Agarwal to welcome a baby

Earlier this week, Indian Idol and Sa Re Ga Ma Pa host and singer-composer Aditya Narayan announced that he and his designer wife Shweta Agarwal are expecting their first child together. Later, he also shared the pictures from Shweta’s baby shower. Recently in an interview, Aditya revealed that the baby is due in February. Aditya and Shweta are excited to welcome this new phase in their lives.

Earlier this week, reports surfaced stating that Shivangi Joshi, Randeep Rai and Samridh Bawa starrer Balika Vadhu 2 will be going off-air. However, BollywoodLife.com had reached out to Anand aka Randeep who shared that he had not been informed about any such thing by the makers. The actor refuted the reports stating it was false.

This past week, we got a handful of updates on Ekta Kapoor‘s upcoming TV show Naagin 6. It was reported that Tejasswi Prakash has been confirmed to be a part of Naagin 6. Simba Nagpal’s name also surfaced as one of the confirmed leads as per the reports. Ieshaan Sehgal has also joined Naagin 6 as one of the cast members reportedly. We ran a poll asking y’all as to who do you want to see opposite Tejasswi Prakash in Naagin. Simba’s fans didn’t want the Bigg Boss 15 contestant against him. Sidhant’ Gupta’s name has also surfaced. It is said that Shaheer Sheikh will be making a cameo in the series.

That’s all in the TV news this week.