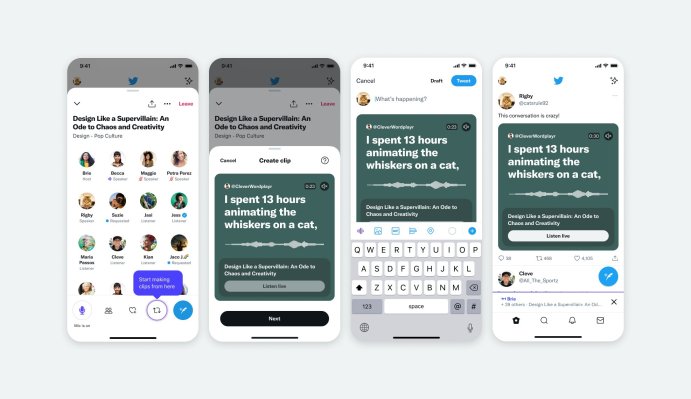 Twitter has started testing a new clipping tool for Spaces, the company announced this week. Select hosts on iOS are now able to clip 30 seconds of audio from recorded Spaces to share them with others on Twitter. All iOS users can see and listen to the clips on their timelines. Twitter says the new feature will be coming to its Android and web applications soon.

Hosts will be able to create audio clips from recorded spaces that can be shared via a tweet that will also link back to the whole recording. The new tool is a way for hosts to boost interest in their Spaces will also highlighting specific parts of a broadcast without having to share an entire recording.

ever wish you could capture a moment from a Space? great because we’re testing clipping!

certain Hosts on iOS can now clip 30 seconds of audio from recorded Spaces to share, everyone on iOS can see & listen to clips on the Timeline—coming to Android and web real soon pic.twitter.com/DZcV1dzGaz

Clubhouse, the social audio app that prompted the launch of Twitter Spaces, rolled out its clipping feature last September. The feature allows live listeners in public rooms to snip the most recent 30 seconds of audio and share it anywhere. These can be shared on other social media platforms. Clubhouse’s clipping feature differs from the one Twitter is testing because its tool allows all users to create clips, as opposed to just hosts. Given that Twitter’s tool is still in the testing phase, it’s possible that the company may tweak it before officially rolling it out.

TechCrunch reached out to Twitter to see if it plans to expand the clipping tool to all users as opposed to just hosts, but did not immediately receive a response.

Twitter has been introducing several Spaces features over the past few months to build out the offering. The company has been working on Spaces Recordings, a feature that will let hosts share tweets with audio recordings of past Spaces. Earlier this year, Twitter gave hosts who have shared recorded Spaces the ability to to see how many listeners joined live, as well as how many people replayed the recording after the fact.

Live audio grew in popularity amid the pandemic as people around the world were confined to their homes. But, as restrictions have lifted in many countries and in-person events have returned, companies that offer live audio room capabilities like Twitter and Clubhouse, are looking to retain users by launching new features.