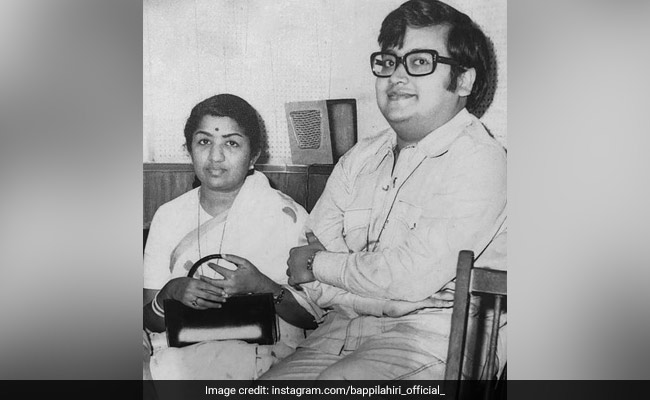 A throwback of Lata Mangeshkar and Bappi Lahiri. (courtesy: bappilahiri_official_)

This month has been hard for fans of Indian film music; two legends have been lost – Lata Mangeshkar on February 6, Bappi Lahiri last night. On Twitter today, both are being remembered with love and respect. Lata Mangeshkar and Bappi Lahiri collaborated on several unforgettable songs; she sang for his earliest films – in fact, she sang his first ever composition for a Bengali film titled Daadu – and he often credited her with helping him succeed in a tough business. Together, they gave Indian cinema hits like Thoda Resham Lagta Hain from Jyoti,Gori Hai Kalaiyaan from Aaj Ka Arjun, Naino Mein Sapna from Himmatwala, and Aao Tumhen Chand Pe Le Jayen and Abhi Abhi Thi Dushmani from Zakhmee.

Bappi Lahiri died of sleep apnea in a Mumbai hospital late last night. He had been in hospital a month. Lata Mangeshkar was admitted to Mumbai’s Breach Candy Hospital on January 8 after testing positive for COVID. She was in hospital for several weeks being treated for COVID and pneumonia and died earlier this month at the age of 92.

Twitter is grief-stricken and not afraid to show it.

“Two legends are in heaven now,” tweeted a fan.

“Two icons of the Indian music industry,” added another fan.

After Lata Mangeshkar’s death on February 6, Bappi Lahiri had posted a childhood throwback of himself with the singer and he wrote: “Maa.”

Lata Mangeshkar had sung in Hindi, Marathi, Bengali and other regional languages. She was honoured with the Bharat Ratna, Padma Vibhushan, Padma Bhushan and Dadasaheb Phalke Award as well as several National and Filmfare Awards. Lata Mangeshkar’s last complete album was for 2004 Bollywood release Veer-Zaara.

Bappi Lahiri was best-known for composing hits in the late 1970s-80s for films like Chalte Chalte, Disco Dancer, and Sharaabi, to name a few. His last Bollywood song was titled Bhankas was for the 2020 film Baaghi 3. The veteran singer also made an appearance during an episode of the last season of the TV reality show Bigg Boss 15, where he arrived as a guest.