How many voters can the BJP lose while remaining the winner of the election?

The BJP won the last UP election in a landslide. A victory margin so big that many, if not most, observers sense that it cannot be overcome by the Opposition. Polls forecast that even though the BJP may lose 100 seats (from 325 down to 225 seats out of the 403 in UP), it would still win with a clear majority.

This clearly appears to be a solid, insurmountable foundation – but is it unprecedented? Not quite, because UP has always been a volatile state. The average margin of victory in all UP elections since 1997 is only just below this BJP landslide in 2017 (see figure 2).

However, the BJP has another distinct advantage as it fights this election – the Opposition has been so divided that the BJP can survive a larger than normal swing away in its popular vote (see Figure 4). If it faced a near-unified Opposition, the BJP would lose with a swing away of 5%, but with the Opposition fragmented the way it is, the swing away from the BJP would need to be significantly higher. So, how many voters can the BJP lose while remaining the winner of the election? 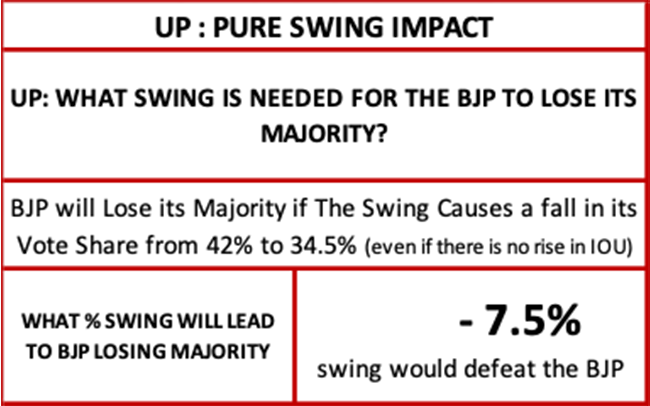 Nevertheless, despite this enormous swing needed for the BJP to lose this election, there is concern within the BJP that swings of this magnitude are not uncommon in UP. In fact, the swing in favour of the BJP in the last election in 2017 from 2012 was a huge 26% (see figure 5) and it climbed from 47 seats to 325 seats. 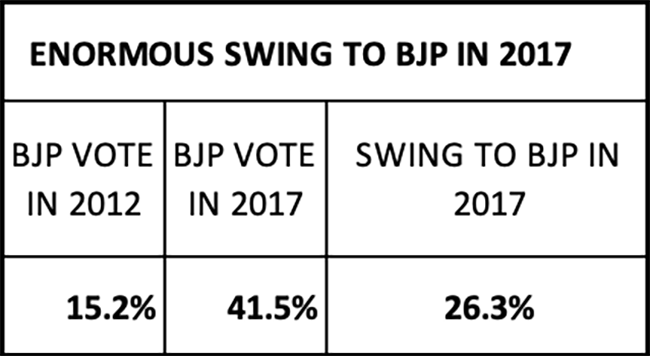 The good news for the BJP is that it can afford to drop a large chunk of that one-time gain and still hold on to power. 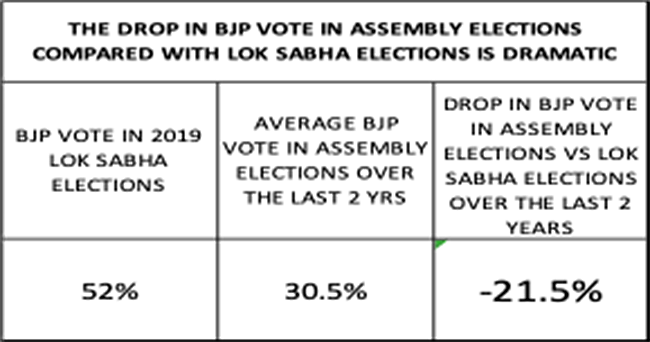 Nevertheless, the bottom line for the BJP is that it has entered the contest in this election with an almost unprecedented foundation vote coupled with a large margin of victory because of a deeply-divided Opposition. The problem it faces is that the state has gone through a deep financial crisis because of Covid – it doesn’t really matter if the BJP handled Covid well or not, people have suffered terribly. Coupled with a rise in prices – again, it doesn’t matter whether it is a result of external factors (like the rising price of oil) – this has generated anger in the population, and few governments in history have managed to prevent a swing away after these crises. The main target for the BJP is to prevent the swing away from being more than 7% – because more than that means it could lose power.