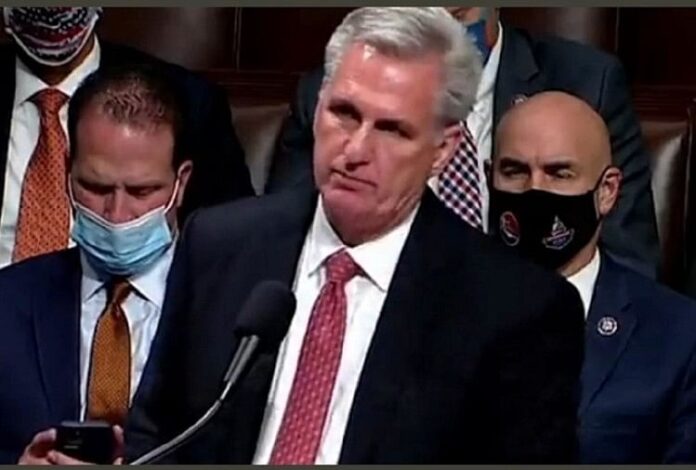 There is a lot of uproar in American politics after receiving confidential documents from US President Joe Biden’s house. More than two dozen classified documents were found at Biden’s residence in Delaware and his private office in Washington DC. At the same time, the Department of Justice had appointed a special counsel to investigate the matter, for which the newly appointed Speaker of the House of Representatives, Kevin McCarthy, has taunted and termed it as hypocrisy.

In his first interview since his appointment as House Speaker, McCarthy said the appointment of the special counsel to investigate the classified documents exposed the hypocrisy of the ruling Democrats and was the reason the American public did not trust his government.

McCarthy explained in an interview that Congress has an independent constitutional obligation to oversee all aspects of the Justice Department, including the special counsel, and therefore, we will have a role in overseeing what’s going on here. McCarthy, a Republican, was elected as the new speaker of the US House of Representatives on January 7.

The documents recovered from Biden’s private office in Washington DC date back to when he was Vice President from 2009 to 2016. He said Hur would investigate matters that were the subject of a preliminary investigation by US Attorney John R. Lausch Jr. into the Penn Biden Center for Diplomacy and Global Engagement and the secret documents found at the Wilmington, Delaware, private residence of President Joseph R. Biden Jr. or related to the possible unauthorized removal and retention of other records.

“Based on Lausch’s preliminary investigation, I conclude that it is in the public interest to appoint a special counsel under the Special Counsel Rules,” Garland told reporters at a press conference here. The department has since identified Hur for appointment as special counsel as Losch continues the investigation.