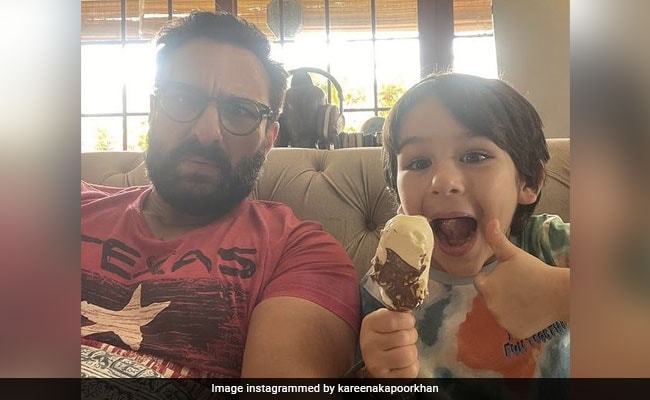 Kareena Kapoor is spending Valentine’s Day with her “forever two” – husband Saif Ali Khan and older son Taimur – and there’s ice cream involved. In a picture shared on the actress’ Instagram, Taimur holds up a bar of ice cream (Magnum, as Arjun Kapoor helpfully informed us in the comments) to the camera. Next to him is dad Saif looking, umm, rather less gleeful than his five-year-old. Baby Jeh, soon to be one, was not included in the photo, presumably because he’s too young for either ice cream or Valentine’s Day. In her caption, Kareena Kapoor wrote, “Is it Valentine’s Day? Ok then let’s ice cream…#forever two Saifu and Tim Tim.”

Kareena Kapoor often shares glimpses of her friends and family on her Instagram account. She recently, shared a picture of husband Saif Ali Khan and son Taimur and wrote: “My mornings… Saif – Beboo are you taking another picture for Instagram? Me – Ummmmm Click! Saifu and Tim Tim. My boys.”

Kareena Kapoor and Saif Ali Khan welcomed son Jeh in February last year. “We have been blessed with a baby boy. Mom and baby are safe and healthy. Thank you to our well-wishers for their love and support,” Saif said in a statement. Kareena and Saif Ali Khan married in 2012 after dating for some years. Taimur was born in 2016. Here’s a picture of Jeh.

Kareena Kapoor and Saif Ali Khan, co-stars of films like Omkara, Agent Vinod and Kurbaan, fell in love during the shooting of the film Tashan. In her piece for Humans Of Bombay, Kareena Kapoor once said, “Somehow through my life, I’ve been blessed with people who have supported me thoroughly! So just when I thought I was falling, Saif caught me. I’d met him before, but while we were filming Tashan, something changed. I wore my heart on my sleeve! He was so charming; I fell for him hook, line and sinker.”

Kareena Kapoor was last seen in the 2020 film Angrezi Medium, co-starring late actor Irrfan Khan, and actress Radhika Madan. On the work front, Kareena Kapoor will next be seen in Aamir Khan’s Laal Singh Chaddha. The film is the official Hindi remake of Tom Hanks’ Forrest Gump. Naga Chaitanya is also a part of the film, which has been directed by Advait Chandan.