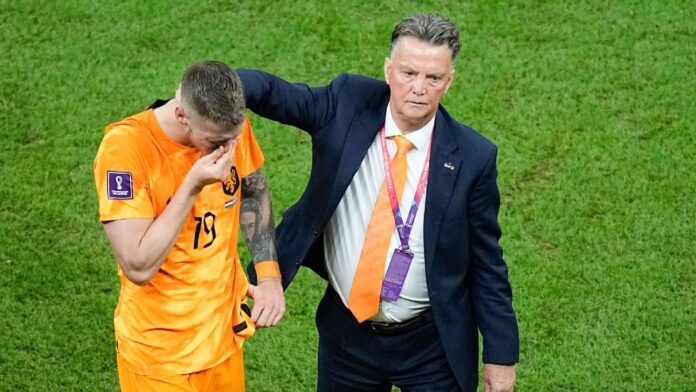 Netherlands Coach Louis van Gaal praised the efforts of his squad, who came back from two goals down in the World Cup quarter-finals. Argentina His eventual exit proved painful, albeit in the penalty shootout.

The Dutch made a dramatic comeback with two late goals to level their match 2–2 after 90 minutes and take the last-eight encounter into extra time at the Lusail Stadium, where the scoreline remained the same until the final whistle.

But they missed their first two penalties and went on to lose 4–3 in the shootout.

He said, “I told the players to train at their club to take penalties and they did. To come from 0-2 to 2-2 behind was a great achievement, but then to lose on penalties is tough.”

“I can’t blame myself, I think, we prepared everything. My players fought till the end and they were dead in the changing room.

“He gave everything and I’m really proud, we haven’t lost in 20 games,” Van Gaal said of his record in his third spell as Dutch coach after taking charge last September.

He now leaves at the end of his contract.

“We missed the first two penalties in the shootout and that put the pressure on the rest of the penalty takers. It’s still a lottery and good luck to them.” [Argentina] They won,” he said.

The Dutch didn’t start the game well, the 71-year-old coach admitted. “The problem was we couldn’t find free men with the ball. I tried to solve that at half-time and then we changed our tactics three times in the second half.

“We fought incredibly hard to come back from a 2-0 deficit against a powerful Argentina side who can defend very well.”

Van Gaal also felt that the Dutch lost the initiative in extra time but said it was “logical” due to fatigue.

“In the second half we ran a lot more than Argentina and they had few players in the final stages. We thought we would win on penalties because of the training we did.”