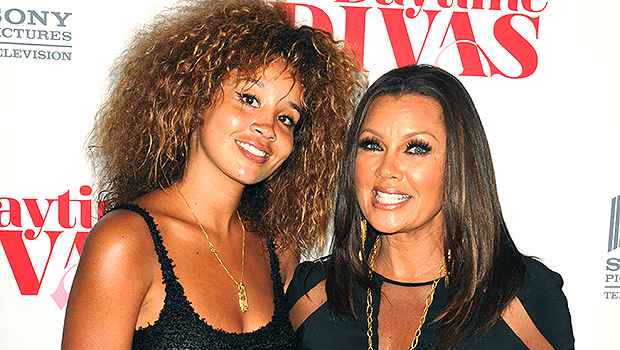 When it comes to Hollywood, multi-talented icon Vanessa Williams, 59, has tried her hand (and succeeded) at every corner. First rising to stardom in 1984 as the first Black woman to win the Miss America crown, Vanessa went on to build a storied career on the stage and screen. Starring in Broadway productions like Kiss of the Spider Woman and Into the Woods, the latter of which won her a Tony Award, Vanessa established her one-of-a-kind talent, and will even return to the stage this May in POTUS. Vanessa has also gained acclaim on the small screen, winning an Emmy Award in 2007 for her role on Ugly Betty.

Through the many phases of her career, Vanessa has also managed to raise a beautiful family, welcoming her first child when she was 24. In an as-told-to essay for Glamour, Vanessa opened up about how decades of being a mom have shaped her as a person. “I’ve been a mother so long that it’s hard to remember what my life was like before then,” she revealed, “but parenthood has never felt like a burden: It strengthened my outlook on life and made me more ambitious in my career.” Learn more about the four children Vanessa calls her own, below!

Vanessa welcomed her eldest daughter, Melanie, in 1987, with her first husband Ramon Hervey II. Ramon was one of Vanessa’s first managers and was 10 years her senior at the time they wed. Though Ramon and Vanessa would go on to divorce in 1997, they welcomed two daughters and a son first: Melanie, Jillian, and Devin.

Melanie, who remains largely out of the public eye, worked in the fashion business for nearly a decade before leaving it behind to become a teacher. Though Melanie previously worked on shows like E! True Hollywood Story and Dealin With Idiots, for the most part, Melanie has chosen to build a life outside the Hollywood eye.

Vanessa’s second daughter, Jillian, was born in 1989, and has gone on to establish her own voice in Hollywood…quite literally! As the lead singer of R&B duo Lion Babe, Jillian has brought her smooth and soulful croon to three albums and has worked with rappers like Busta Rhymes and Childish Gambino (better known to some as Donald Glover.)

Welcoming more than just new singles, Jillian also recently had her first child, who she shares with Lion Babe counterpart, producer Lucas Goodman. In light of the big news, Vanessa couldn’t resist taking to Instagram to share the excitement and joy she felt watching her daughter enter motherhood, and for becoming a grandmother herself. Captioning a photo of herself beaming as she held her hand to Jillian’s belly, Vanessa wrote: “I’m always here to support, advise and babysit at any moment.” She also sweetly thanked Lucas in the caption, who “has been by Jillian’s side since the beginning with support, love, and endless creativity.”

Vanessa welcomed her one and only son in 1993. Though he acted alongside his mom in the 2000 romantic historical drama The Courage of Love, other than that Devin has not chosen a life of celebrity, and instead reportedly works at a high fashion outlet in Los Angeles.

Though Devin himself may lead a private life, Vanessa has shared just how much he means to her in many ways. She even revealed an adorable moment from Devin’s childhood in an interview with Black Voices, sharing: “I love when the kids make things and prepare meals. I used to love when they were young and they’d make the menu and prepare the brunch for me and wake me up with some handicraft note. And one time my son learned ‘You are My Sunshine’ and he waited until Mother’s Day morning [to sing it]. So the things that are not bought are my favorites.”

Vanessa shares youngest daughter Sasha Fox with second husband and NBA player Rick Fox, who she wed in 1999. After welcoming Sasha in 2000, Rick and Vanessa would go on to divorce in 2005, with Vanessa in part citing the high pressure of her being in show business and him managing the NBA.

Now 21, Sasha has followed in her mom’s footsteps and begun to build a burgeoning career as a model and actress. After performing in A Diva Xmas Carol and Justice for All with Judge Cristina Perez, Sasha also found herself in the pages of Vogue modeling for Serena Williams‘ line ‘Serena.’ Although Sasha is clearly as busy as her mom once was building a career, she’s still finding time to be a young adult, and is currently receiving her degree from Chapman University in Orange, California.