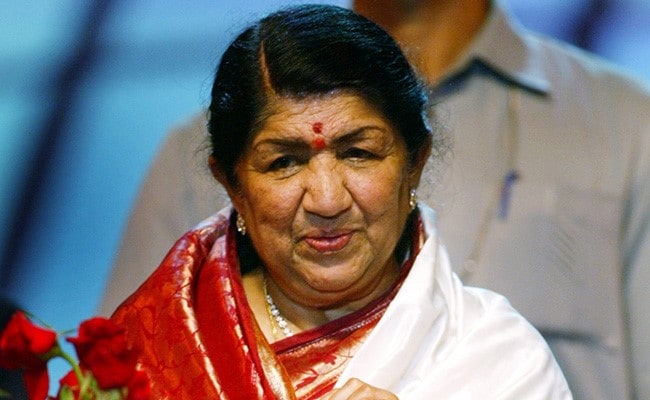 Lata Mangeshkar was popularly known as the ‘Nightingale of India.’

Ms Mangeshkar was taken to the intensive care unit on January 8 after testing positive for COVID-19. On Saturday, her condition had deteriorated again and she had to be put on ventilator support. She was under medical observation. Lata Mangeshkar was being treated for both pneumonia and COVID-19. Her symptoms were mild but she was in ICU because of her age, family said.

Over the next few weeks, Ms Mangeshkar showed signs of improvement. However, on Saturday, hospital authorities said that Lata Mangeshkar had been put back on the ventilator after her health deteriorated, news agency ANI reported.

Lata Mangeshkar, a recipient of the Bharat Ratna, Padma Vibhushan, Padma Bhushan and Dadasaheb Phalke Awards, was an icon of Indian cinema, having sung playback for an extensive list of Hindi films; she also sang in several regional languages including Marathi and Bengali.

Ms Mangeshkar, who belonged to a prominent musical family, also composed music as well as produced a handful of films. She was popularly known as the ‘Nightingale of India.’

Prime Minister Narendra Modi was among the first ones to share the sad news and said he is “anguished beyond words”.

“The kind and caring Lata Didi has left us. She leaves a void in our nation that cannot be filled. The coming generations will remember her as a stalwart of Indian culture, whose melodious voice had an unparalleled ability to mesmerise people,” he tweeted.

Here are the updates on Lata Mangeshkar’s Death:

One of the greatest Indians and most compassionate and loving souls, and the finest voice, @mangeshkarlata didi, departed for her heavenly abode this morning.
Suddenly the world of music is devoid of its most beautiful personification.
Om Shanti 🙏🏻

Heartbroken, but blessed to have known & loved this incredible soul…Lataji holds a place in our hearts that will never be taken by anyone else. That’s how profoundly she has impacted our lives with her music.
May she rest in peace & light up the heavens with her brightness 🙏🏻 pic.twitter.com/HjgIQyE7mo

An icon a legend .. words will always fall short. Thank you for your glorious voice Lata ji. It will resonate worldwide for generations to come. RIP .

Meri Awaaz Hi Pehchaan Hain, Gar Yaad Rahe…and how can one forget such a voice!
Deeply saddened by the passing away of Lata Mangeshkar ji, my sincere condolences and prayers. Om Shanti 🙏🏻

Lata-ji’s demise is heart-breaking for me, as it is for millions the world over. In her vast range of songs, rendering the essence and beauty of India, generations found expression of their inner-most emotions. A Bharat Ratna, Lata-ji’s accomplishments will remain incomparable. pic.twitter.com/rUNQq1RnAp