Vicky Kaushal is one actor who never ceases to impress. Be it his role as an army officer in ‘Uri: The Surgical Strike’ or that of a freedom fighter in ‘Sardar Udham Singh’, he metamorphoses into something new with every film. The actor maintains a stringent fitness regime for his many roles and does not dither when it comes to the diet as well. However, even Vicky Kaushal is a self-confessed foodie and cannot help but indulge in some delicious food every now and then! He took to Instagram to share a yummy sweet that he treated himself to. Can you guess what it was? None other than the simple peanut butter toast! Take a look:

Vicky Kaushal indulged himself in this yummy dessert.

In Vicky Kaushal’s plate, we could see a yummy brown bread toast with oodles of chunky peanut butter on top. The actor had already taken a bite of the slice. There were also two pieces of what seemed to be luscious dark chocolate. Vicky Kaushal drew a heart on Instagram stories for this delightful yet tasty treat.

This is not the first time that Vicky Kaushal has confessed his adulation for sweets. Those who follow the actor closely would know he has an immense appreciation for all things sugary. Jalebi is one of his favourite Indian sweets of all time, and he often relishes it on his visits to Indore. Recently, he had also savoured the winter favourite Gajar ka Halwa while sitting in his balcony and enjoying the sunset while reading a film’s script. Take a look: 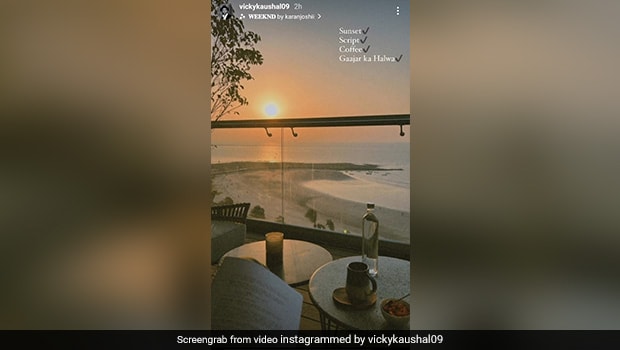 “Sunset. Script. Coffee. Gajar Ka Halwa,” he wrote in the caption of his story. We don’t know about you, but these Instagram stories by Vicky Kaushal have definitely got us drooling! If you want to whip up a quick dessert for yourself, we have just what you need. These easy dessert recipes are ready in a matter of minutes and taste every bit delicious.

Click here for the best easy dessert recipes you can make at home.

On the work front, Vicky Kaushal has a number of projects lined up. His next film will be ‘Govinda Naam Mera’ alongside Kiara Advani and Bhumi Pednekar. The entertainer is slated to release on 10th June, 2022. Meanwhile, he is also working Triptii Dimri in an untitled comedy film directed by Anand Tiwari. The film is currently on floors and also features Ammy Virk in a key role, according to reports.

About Aditi AhujaAditi loves talking to and meeting like-minded foodies (especially the kind who like veg momos). Plus points if you get her bad jokes and sitcom references, or if you recommend a new place to eat at.