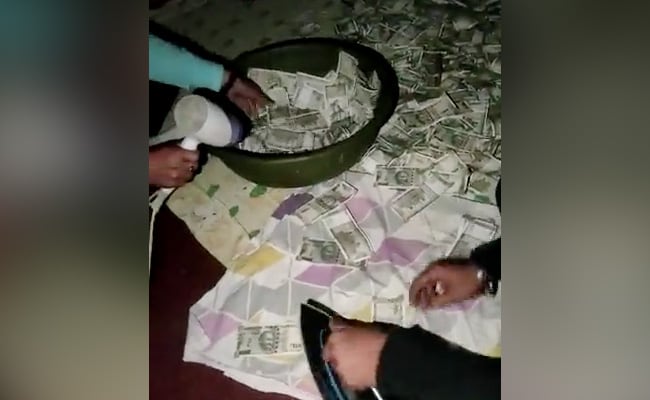 A video shows the tax officials drying the cash.

Madhya Pradesh-based businessman Shankar Rai and his family in the state’s Damoh district were raided on Friday and unaccounted cash worth over Rs 8 crore was recovered, the Income Tax Department has said.

The cash was found in a bag that was hidden in an underground water tank. A video shows the tax officials drying the cash. Apart from cash, jewellery worth around Rs 5 crore was also seized.

Cash was stashed in an underground tank, hair dryers and clothes iron were used by IT dept sleuths to dry up the cash @ndtv@ndtvindiapic.twitter.com/gKq1lXS3km

The raid which started at 5 am on Thursday continued for 39 hours. The Tax officials raided more than ten premises owned by Shankar Rai’s family.

Mr Rai’s family was running around three dozen buses in the name of employees, the tax department revealed.

The department has declared Rs 10,000 reward for anyone giving more information on assets of the Rai family in Madhya Pradesh or any other location.

After the operation was over, the Joint Commissioner said, “The physical raid is over and that investigation will continue on the basis of the documents seized from the Rai family which would be done in Bhopal,”

“The department will now investigate the seized documents and unnamed properties. So, we will have to wait for the final figure”, said The Joint Commissioner.