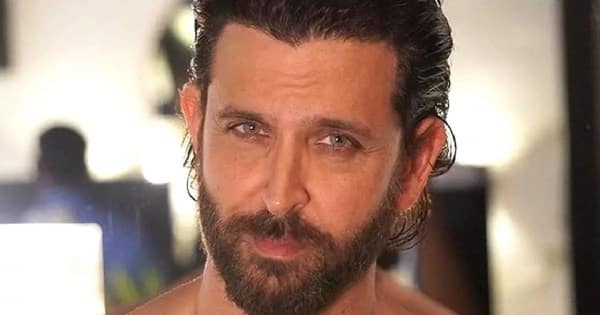 Hrithik Roshan celebrates his 48th birthday today. To mark the occasion and give a treat to his fans, the actor took to his social media accounts to unveil the first look of his upcoming film Vikram Vedha. The film is the Hindi remake of a blockbuster Tamil movie with the same name that starred Madhavan, Vijay Sethupathi, Shraddha Srinath, Kathir and others in pivotal roles. In the Hindi version of Vikram Vedha, we shall see Saif Ali Khan along with Hrithik Roshan. Also Read – Krrish 4: Here’s when Hrithik Roshan’s superhero film will finally go on floors

On Twitter, Hrithik Roshan shared a post revealing his look as Vedha in film. We can see him dressed in black and white kurta and has blood all over him. He is flaunting aviators and his swag is top-notch. The rugged look in full grown beard is simply WOW. The actor had last appeared in WAR in which he had sported a macho, sophisticated personality with a light stubble. Here he has gone all raw and rugged. Check out his tweet below: Also Read – When Hrithik Roshan thought Aishwarya Rai Bachchan was just a ‘pretty face with no talent’

Apart from Hrithik Roshan and Saif Ali Khan, we shall also see stars like Radhika Apte, Rohit Saraf, and others in this film. The release date of Vikram Vedha is yet to be unveiled. Also Read – Hrithik Roshan Birthday Special: 10 movies rejected by the Fighter star that went on to become blockbusters

Apart from this, Hrithik Roshan also has Fighter in his kitty. He will be sharing the screen space with Deepika Padukone in this one. It was recently that he also welcomed Anil Kapoor as he joined the Fighter gang. As revealed by Rakesh Roshan, Krrish 4 is also on cards. It looks like Hrithik has a very tight schedule ahead.