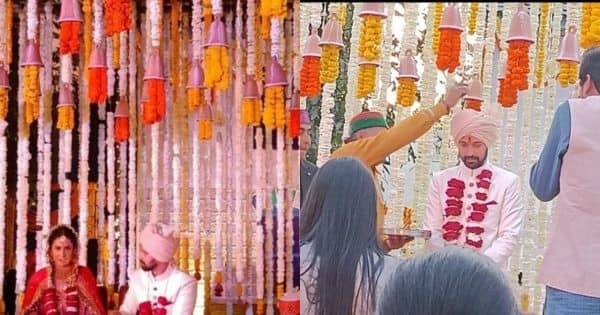 Vikrant Massey and Sheetal Thakur are a married couple now. The pics from their wedding ceremony in are out. They got married in Himachal Pradesh. Vikrant is wearing a white sherwani with the pink turban. On the other hand, Sheetal is seen wearing a red dupatta and lehenga. Vikrant and Sheetal are in a relationship since 2015. They met for the first time during the shoot of their series Broken But Beautiful. They wanted to get married last year, but had to change their plans due to COVID. Have a look at some pics from their shaadi below: Also Read – Trending Entertainment News Today: Alia Bhatt reacts to criticism on Gangubai casting; Dharma Productions posts negative review of Gehraiyaan and more

Their Haldi ceremony was held yesterday. Have a look at the video below: Also Read – Love Hostel actor Vikrant Massey OPENS up about his college days; says, ‘I tried to impress girls but failed miserably’ [Watch Exclusive Video]

Back in 2020, Vikrant had shared a post for Sheetal. He had written, “Nothing extravagant about this picture…Just that one person who is my rock!!! So just thought of telling you out there, that come what may, sunshine or rain, appreciate the presence of your family & loved ones. It doesn’t matter what you do, how you live or how much money you make, THEY WILL ALWAYS BE THERE!!! Just take a moment to appreciate & thank them for whatever they bring to your life.” Also Read – Vikrant Massey gets married to Sheetal Thakur in an intimate ceremony? Read Deets

In an exclusive interview with BollywoodLife, he revealed that Sheetal’s straightforward nature is something which he loves and hates about her. He said that it is great when she course corrects him, but at times it’s also irritating.

On the professional front, Vikrant will next be seen in Love Hostel. It is slated to premiere on Zee5 on March 25, 2022. The trailer of the film was released recently.