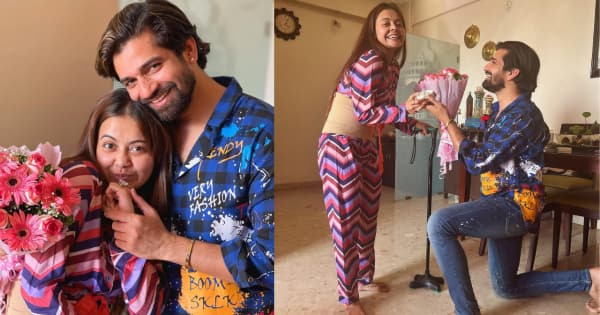 Bigg Boss 15’s Devoleena Bhattacharjee has confirmed her relationship with Vishal Singh. The Saath Nibhaana Saathiya actors have made it official on Instagram now. Vishal Singh proposed to Devoleena Bhattacharjee with a huge solitaire ring. Devoleena flaunted her huge diamond ring in the pictures. The actress is recuperating from her surgery, has a belt around her back and is walking using a stick. Vishal reached her home with flowers and a ring and took the opportunity to propose to her. It seems the two have been waiting for this moment itself. ” It’s official Love you @devoleena,” Vishal captioned the shared post. Check it out here: Also Read – Anupamaa, Bade Achhe Lagte Hain 2, Yeh Rishta Kya Kehlata Hai, TMKOC and more: Actors who REJECTED these Top TV shows

Devoleena and Vishal worked together in Saath Nibhaana Saathiya. Devoleena played his sister-in-law. Devoleena and Vishal have known each other for a couple of years. From her previous interviews, it was known that Devoleena had been in a relationship. However, the two of them kept their relationship a secret for a long time. And now, they have finally made it official. Wishes are pouring in for the two lovebirds from friends and well-wishers.

Interestingly, Devoleena Bhattacharjee was linked to Pratik Sehajpal inside the house of Bigg Boss 15. She had claimed on several occasions that she had a soft spot for Pratik inside the house. However, they maintained being good friends on the show. Apart from Pratik, Devoleena’s equation with Abhijit Bichukale had also grabbed eyeballs. Abhijit demanded a kiss from Devo on national television, it had led to a controversy.

In Bigg Boss 15, Devoleena had opened up on wanting to get married. And now that she has announced her engagement, the wedding may happen soon too.