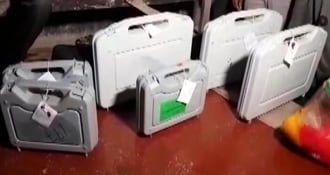 The Samajwadi Party, the biggest challenger to the BJP in the recently held elections in Uttar Pradesh, today alleged that Electronic Voting machines were being taken away from the counting centres in Varanasi. The counting of votes will be held on Thursday and the party has claimed that it will win more than 300 seats in the state where the BJP is hoping for another term in power.

The District Magistrate of Varanasi, however, said the EVMs were being used for training purposes and they were not the ones used for voting.

Accusing “some political parties”  of “spreading rumours”, District Magistrate Kaushal Raj Sharma said the EVMs used in the elections “are all sealed in the strong room in the possession of CRPF and there is CCTV surveillance which is being watched by people of all political parties”.

“The EVMs were going to UP College from the storage made in a separate food godown located in Mandi,” said Mr Sharma. “Tomorrow is the second training of the employees engaged in counting duty and these machines are always used for hands-on training,” he added.