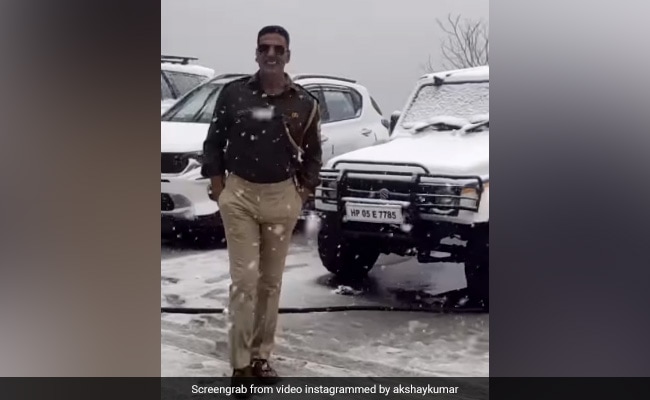 Akshay Kumar in a still from the video. (courtesy akshaykumar)

Akshay Kumar may be one of the biggest stars in the country today but that does not stop him from expressing his gratitude for all that he has achieved. He is currently in Mussoorie to shoot for one of his upcoming projects. And, on Thursday, Akshay Kumar shared a video of him walking on a road in Mussoorie where it is snowing. The clip features Akshay Kumar in a police officer’s uniform. In it, he is strolling on the road covered in snow with a smile on his face. The song, Dil Na Jaaneya, from his film Good Newwz,  has been added in the background of the video.

Sharing his experience, Akshay Kumar wrote, “Grateful to have a job which helps me live such beautiful experiences. Mussoorie, you’re a dream to shoot in.”

With one project after another, it looks like Akshay Kumar is in no mood to slow down. Just a few days ago, the actor shared a video after wrapping up his film, Ram Setu. He will be seen with Jacqueline Fernandez and Nushrratt Bharuccha in the movie. Sharing a video of his team celebrating the wrap, Akshay Kumar wrote, “Here’s to the wrap of yet another amazing project Ram Setu. I learned so much during the making of this film, it was like going to school all over again. Badi mehanat ki hai ham sabne, ab bas aap ka pyaar chaahiye [We all have worked hard, now all you need is your love].”

That’s not all. Right before this, Akshay Kumar had shared a fun dance video with Emraan Hashmi, announcing that he would be seen alongside the actor in Selfiee, a film that will be produced by Karan Johar and Malayalam superstar Prithviraj Sukumaran among others. “Presenting Selfiee, a journey that will drive you towards loads of entertainment, laughter and emotions. Shooting begins soon,” Akshay Kumar wrote.

In addition to the aforementioned movies, Akshay Kumar has Prithiviraj, Raksha Bandhan, and OMG 2 – Oh My God 2 in the lineup. He was last seen in Aanand L Rai’s Atrangi Re with Dhanush and Sara Ali Khan.