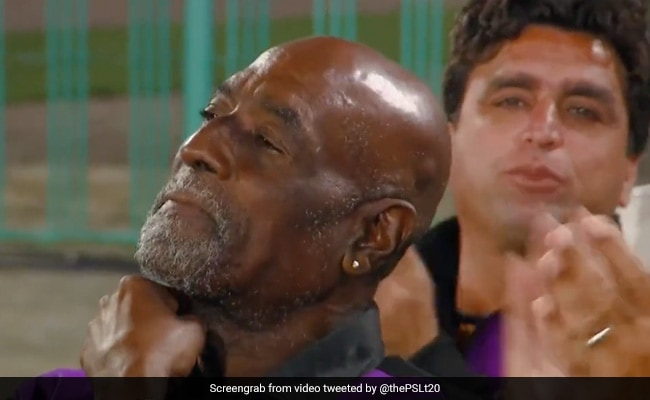 Jason Roy’s magnificent innings in the Pakistan Super League (PSL) match against Lahore Qalandars got the cricket fraternity talking. Legendary West Indies cricketer Viv Richards, who is a part of the Quetta Gladiators support staff was among many who gave his “approval” to the brilliant innings. Roy smashed 116 off just 57 balls to help Quetta chase down a stiff 205-run target in 19.3 overs with seven wickets in hand. Roy hit eight sixes and 11 fours in his blistering innings against perhaps the best bowling attack of PSL which included Rashid Khan, Shaheen Shah Afridi and Haris Rauf.

When Roy was showing no mercy to any of the Lahore bowlers, Richards was seen nodding in reaction to one of the big hits by the England opener in the last match of the Karachi leg of the tournament. Richards’ reaction came when Roy brought up Quetta’s fifty in the second ball of the fourth over with a six.

Former Pakistan skipper Shahid Afridi too lauded Roy’s innings terming it one of the best he has seen in the history of PSL.

“I have seen some amazing innings in the HBL PSL in these seven seasons but nothing compares to what @JasonRoy20 delivered for us today! One truly outstanding innings,” Afridi tweeted.

I have seen some amazing innings in the HBL PSL in these seven seasons but nothing compares to what @JasonRoy20 delivered for us today! One truly outstanding innings.????????

Roy’s 116 was the first century by a Quetta Gladiators batter and 11th overall in the history of the event. This was also the second fastest 100 after Rilee Rossouw’s 43-ball century.

“I think it was one of my best innings and have an incredibly good feeling. The partnership with James Vince was even better.

“It was important that we won this game and take the momentum to Lahore with two wins in five matches. We were always confident and very happy to have won this game with the second highest run-chase,” Roy said after the match.